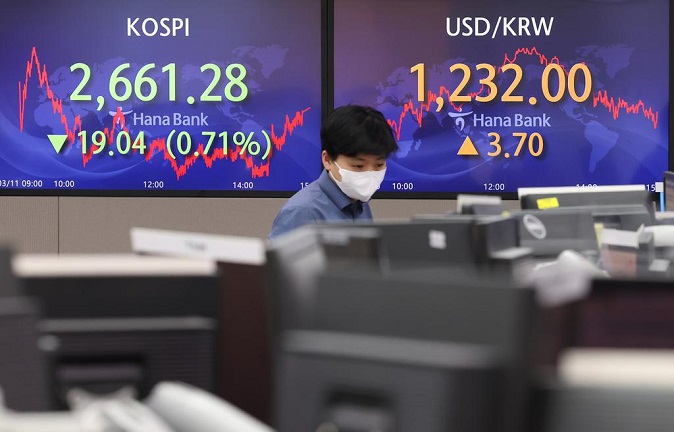 The benchmark Korea Composite Stock Price Index (KOSPI) closed at 2,661.28 points Friday, down 1.92 percent from a week ago. Stock trading was closed on Wednesday for the presidential election.

The key stock index rattled this week according to the rise and fall of the oil prices, largely swayed by the geopolitical tensions in Ukraine.

Oil and commodity prices jumped following the Russian invasion of Ukraine amid no sign of progress toward a ceasefire.

“But there is Russia’s default risk with its government bonds due next week, in addition to the tapering worries about the March meeting of the Federal Open Market Committee. Investors may have to brace themselves for continuing volatility in the short term,” he added.

The two-day FOMC meeting is slated to start on Tuesday in the U.S.

The consensus for corporate earnings in 2022 pointed at a mild curb in sales, but sharper cut in operating and net profit.

In the coming week, U.S. producer’s price index for February and China’s retail sales data for January and February will be released Tuesday in Korea time.

South Korea’s jobless rate and U.S. retail sales for February are set to be released Wednesday.

The March U.S. FOMC meeting results are slated to be announced on Thursday in Korea time.