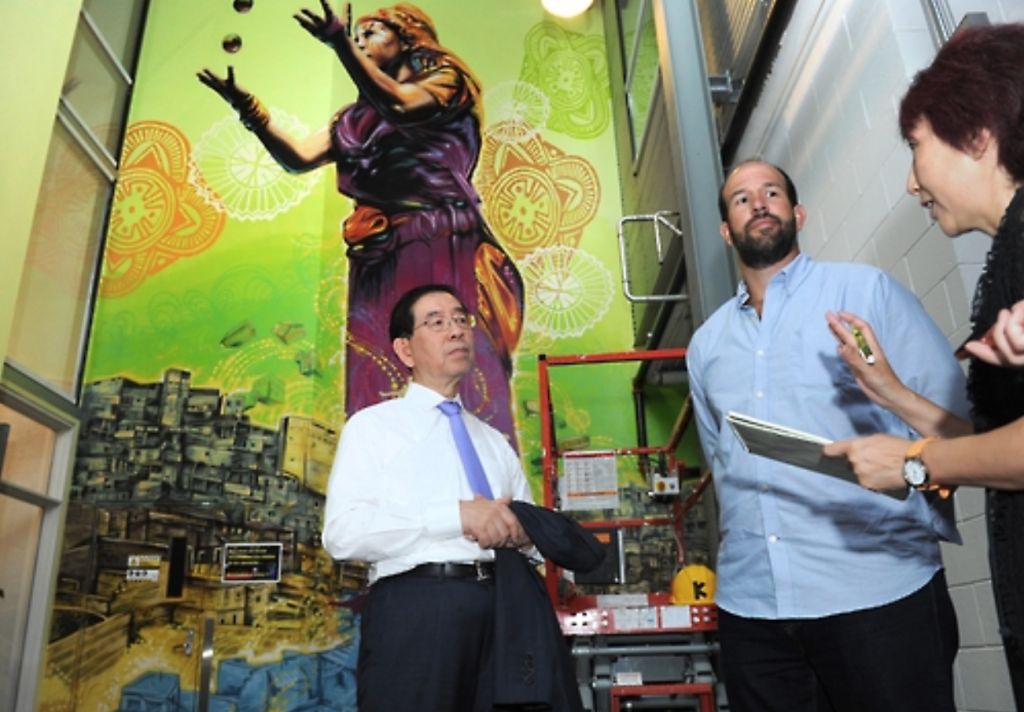 “Cirque du Soleil killed three birds with one stone, by creating jobs, refining the image of an underdeveloped region, and improving the quality of life of city residents via cultural activities,” said Park. (image: Yonhap)

MONTREAL, Sept. 9 (Korea Bizwire) – Cirque du Soleil is a Canadian entertainment company best known for the theatrical production of contemporary circus shows by the troupe of the same name.

The company has some 7,000 employees around the world, with its cast performing shows in 17 countries, generating annual revenue of close to $1.4 billion. In line with founder Guy Laliberté’s motto, “Sharing Everything”, Cirque du Soleil also sets aside 1 percent of its annual revenue for social and cultural programs.

On Thursday (local time), the Cirque’s Montreal headquarters were visited by Seoul Mayor Park Won-soon, who was attracted by the entertainment company’s business model, and saw circus as offering potential for the future of Seoul’s entertainment industry. Park is currently on a tour across North America.

“Cirque du Soleil killed three birds with one stone, by creating jobs, refining the image of an underdeveloped region, and improving the quality of life of city residents via cultural activities,” said Park, after finding out that the circus helped develop the once-landfill Saint-Michel neighborhood in Montreal into a major city district, with the Cirque du Soleil headquarters, the National Circus School, and a circus theater in the area.

“Seoul will come up with measures that can bolster its circus industry as well.”

In fact, Seoul also announced Thursday that it will establish a circus-exclusive practice space by 2017 on the site of the former Guui (water) Intake Station in Gwangjin District, and develop a movable theater (dubbed Big Top) for 300 – 500 spectators by 2018 to offer various performances.

Meanwhile, Mayor Park also visited the National Circus School (École Nationale de Cirque) located adjacent to the headquarters building. It is the only national school of its kind in Canada, and offers students the chance to learn just about everything related to circus performance.

According to the school’s executive director, Éric Langlois, some 80 instructors currently teach approximately 150 students, half of whom are from overseas countries.

The programs are split into beginner, intermediate, and advanced levels, with a three-year curriculum to develop skills and technique. Up to 90 percent of the students succeed in finding jobs upon graduation, either as members of the Cirque du Soleil, or in related industries back in their home countries, said Langlois.

Park also expressed interest in establishing a similar institute in Korea, potentially a regional branch of the École Nationale de Cirque, a suggestion that Langlois welcomed with optimism.

“It would be great if that came true,” he said. “And I hope I can pay a visit to Seoul as a cooperating partner.”