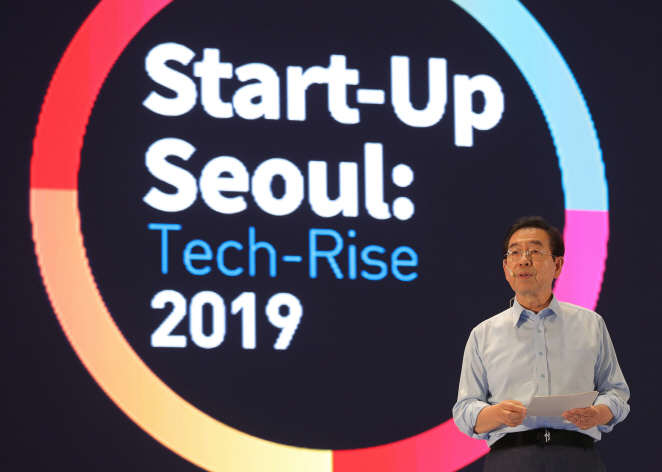 “We will work with the central government and operate an ‘Innovation Academy’ in November to train 2,000 youngsters who will play a leading role in the era of the fourth industrial revolution, plus another 8,000 workers via the Seoul Start-up Support Center who will help us tackle the youth unemployment issue,” Park said in English in his opening speech at “Start-up Seoul: Tech-Rise 2019,” an annual startup forum.

The city will also double the number of spaces for tech startups by 2022 from the current 1,000 and make sure such spaces are available to foreign businesses, the mayor said.

“Any entrepreneur can join the ‘Seoul Start-up Membership’ to receive customized support from specialized organizations,” he said.

In particular, the city has cooperated with the justice ministry to introduce a startup visa fast track for young foreign entrepreneurs who want to start their businesses in Seoul, Park said, adding, “We are considering how to provide affordable housing for them as well.”

The three-day forum was attended by 3,000 entrepreneurs and investors and about 200 startups from 20 countries.