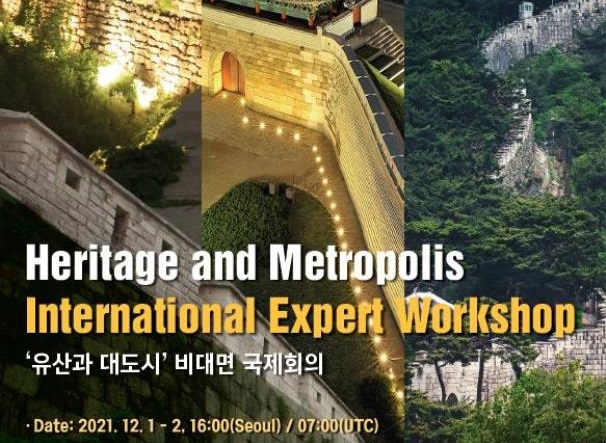 This image provided by the Seoul city government shows the promotional poster for an international expert workshop on “Heritage and Metropolis” to be co-hosted by the city and the U.N.-Habitat on Dec. 1-2, 2021.

The webinar, titled “Heritage and Metropolis,” will bring together city and heritage management experts from more than 30 cities in 15 nations for two days of discussions on Dec. 1 and 2, city officials said.

On the first day of the meeting, participants will share heritage management experiences in 12 historic metropolises, including Paris, London and Moscow.

The city of Seoul, on the second day, will present its heritage management policies, especially those involving the Seoul City Wall, an 18-kilometer Joseon-era fortress stretching along Seoul’s four inner mountains.

On the occasion, the city will also introduce to the meeting its on-going efforts to have the fortress listed as a UNESCO World Heritage site.

Following the Seoul event, U.N.-Habitat, also known as the U.N. Human Settlement Programme, plans to hold further international conferences on the issue through 2022 to compile a global report on heritage and metropolises, according to city officials.

General citizens are also welcome to join the webinar upon prior registration at the website of the Seoul City Wall, the city government said.