“I think (it is important) working together some ins and some outs with other multilateral development banks to effectuate the best policies that accomplish the goals of increasing infrastructure in Asia.”

“The U.S. went through a lot of these top debates since the 1990s and 2000s about standards what multilateral development banks will do and won’t do. I think that’s why the U.S. has a little extra vigilance when it comes to the standards issues, and has a different perspective. 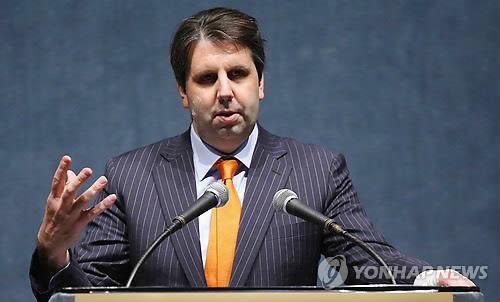 U.S. ambassador to South Korea Mark Lippert speaks at a luncheon conference arranged by the American Chamber of Commerce in Korea on April 20, 2015. (image: Yonhap)

South Korea joined the Asian Infrastructure Investment Bank (AIIB) as a founding member with 56 other economies. The regional bank is seen as a potential counterbalance to U.S.-led multilateral lenders such as the ADB and the World Bank.

Lippert said Seoul and Washington have had widespread consensus on the need for increasing infrastructure in Asia and the role of a multilateral development bank in setting up labor, environment and social standards.

Lippert also said the free trade agreement (FTA) between South Korea and China will not interrupt the Korea-U.S. alliance, which is around 60 years old, but contribute to bolstering the global free trade networks. He cited that South Korea also has an FTA with the United States, or the KORUS FTA, that took effect in 2012.

“We want more free trade, more cooperation and more collaboration. Because in the end, that’s a good thing, and that helps everybody,” he said. “We are very much encouraged in additional trade liberalization between countries and look to work to help American countries and American consumers.”

He said the KORUS FTA will be the key to South Korea’s participation in a U.S.-led regional trade pact, known as the Trans Pacific Partnership (TPP).

Earlier last week, South Korea’s finance minister said that the government will take part in a fresh round of talks on the TPP membership, after previous rounds of “preliminary talks” since Seoul expressed its interest in joining the trade deal in late 2013.