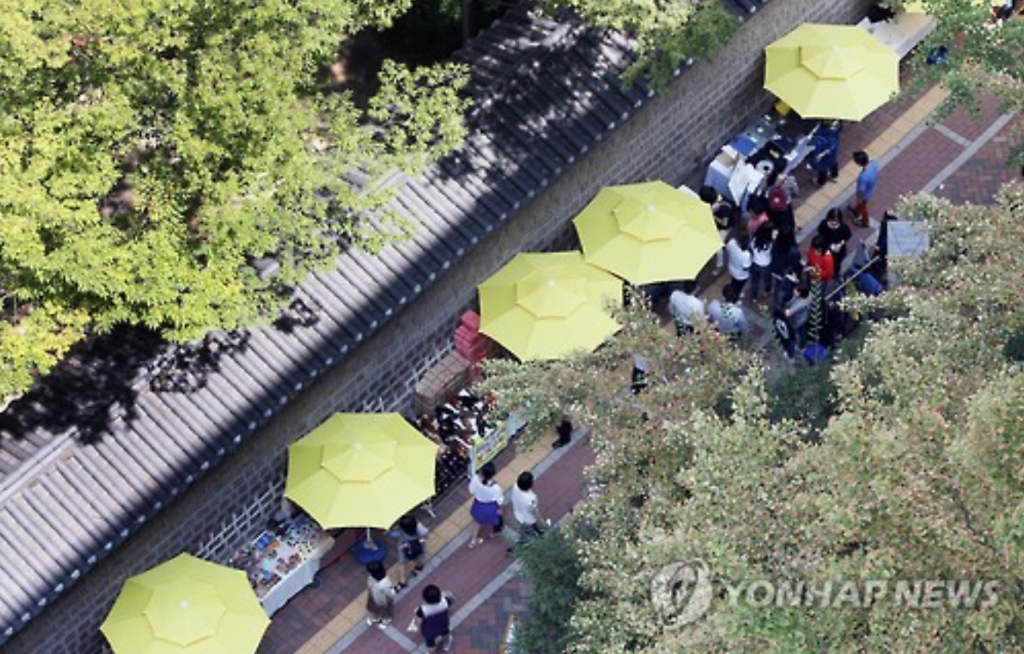 It hosted nine Deoksugung fair-shops since April this year at the Deoksugung Stonewall Walkway. According to the city government, a daily average of 62 enterprises participated in the events, creating sales revenue of 410 million won each day. (image: Yonhap)

SEOUL, Aug. 29 (Korea Bizwire) – The Seoul Metropolitan Government has been subject to various criticisms in its endeavors, like the monster sculpture in Yeouido’s Han River Park (the monster from the record-setting film “The Host”) or the latest ambiguous city slogan ‘I Seoul You’.

But regardless of the other criticisms, the city’s socio-economic enterprises have prospered in recent years, creating jobs and providing opportunities for small businesses to introduce their ideas and products. This year, in particular, has been fruitful, with revenue already surpassing last year’s 1.6 billion won ($1.4 million), at 1.77 billion won as of July.

Seoul’s social enterprises include street markets by the Deoksugung Stonewall Walkway, stores at shopping malls, and other permanent shops and marketplaces across the city.

Seoul has hosted nine Deoksugung fair-shops since April this year at the Deoksugung Stonewall Walkway. According to the city government, a daily average of 62 enterprises participated in the events, creating sales revenue of 410 million won each day.

The city will step up its social enterprises even further starting in September when it will host a market every weekend with hopes of developing the venture into a global tourist attraction, like the Borough Market in London.

Permanent marketplaces currently exist in multiple districts across the city, at Cheonggye Plaza and the DMC (Digital Media City) to name a few. New ones will also open in the latter half of this year, including the Sinchon Culture Market, which will take place on September 4 and October 16, and the second season of the SETEC MegaShow that starts on September 1.

Seoul has also supported small businesses to help them make their way into major online shopping malls like Ticket Monster, and Hamkke Nuri Mall, a social enterprise operated by the city.

All of the city-operated fairs and markets are open via free applications at city websites, said an official.

“The city will continue to expand its operations to further vitalize the social enterprise distribution market,” said Yoo Yeon-sik, Director of Jobs and Labor Policy.