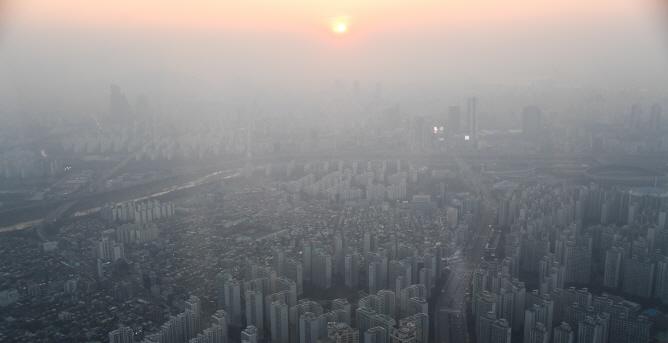 According to the Seoul government, the capital’s density of ultrafine dust particles smaller than 2.5 micrometers in diameter, known as PM 2.5, averaged 28 micrograms per cubic meter between last December and March, down 20 percent from 35 micrograms in the same period of the previous year.

In December last year, the average PM 2.5 level was 28 micrograms, higher than 24 micrograms a year earlier. In the first three months of this year, however, the monthly PM 2.5 averages were all lower than a year ago.

The municipal government attributed the decrease in ultrafine dust pollution to the enforcement of the seasonal management policy, in particular.

Under the seasonal management system, the operation of dilapidated diesel vehicles, coal plants, construction sites and other large emitters are restricted, while roadside cleaning is strengthened and parking fees are increased at public car parks, between December and March.

Ultrafine particles are a class one carcinogen. The weather authorities here categorize concentrations of PM 2.5 between 0 and 15 micrograms per cubic meter as “good,” between 16 and 35 as “normal,” between 36 and 75 as “bad” and more than 76 as “very bad.”

The Seoul government said the number of ultrafine dust “good” days increased from 11 last year to 21 this year, while the number of days when the PM 2.5 level exceeded 50 micrograms fell from 21 to seven.