Family members of the victims of the Sewol ferry disaster observe a moment a silence during a press conference held outside a Sewol memorial hall at Gwanghwamun Square in Seoul on July 27, 2021. (Yonhap)

SEOUL, July 27 (Korea Bizwire) — Bereaved family members of the 2014 Sewol ferry disaster agreed Tuesday to dismantle a memorial hall at Gwanghwamun Square while construction on the plaza is under way.

The Seoul metropolitan government informed the families early this month that it would take down the structure Monday as part of construction work for the restructuring of Gwanghwamun Square.

The families agreed at the time to move the makeshift hall, which was built in April 2019, and asked that a consultative body be set up to discuss an alternative site for when the restructuring is complete.

But the city government rejected the demand, saying the new square is designed to be an “open square” with no structures above ground and that the idea was conceived during the previous administration of liberal Mayor Park Won-soon, not current conservative Mayor Oh Se-hoon.

At a press conference outside the hall on Tuesday, the family members said they will personally remove all items and temporarily transfer them to an exhibition hall on the first floor of the Seoul Metropolitan Council building and then allow the facility to be dismantled.

“A small but memorable space has been made at the Seoul Metropolitan Council,” Jang Dong-won, an official of the 4/16 Sewol Families for Truth and A Safer Society, a group of victims’ families, earlier told Yonhap News Agency.

“The temporary space will be run by the Society.” 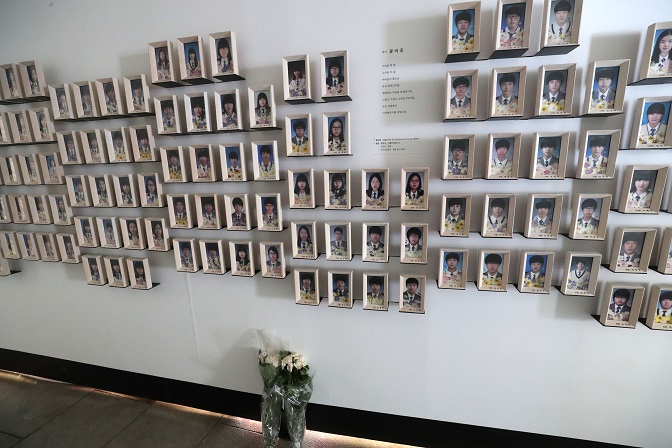 This photo, provided by the National Assembly’s photo press corps, shows photos of the victims of the Sewol ferry disaster hanging inside a memorial hall at Gwanghwamun Square in Seoul on July 26, 2021.

The families accused the city government of making unilateral demands, saying it offered no alternative space to install the items related to the tragic ferry sinking on April 16, 2014, including photos and a wall engraved with the victims’ names.

The disaster left 304 people dead or missing, many of them high school students on a field trip, and led to months of national mourning and soul-searching as people demanded accountability from the conservative government of then President Park Geun-hye.

The dismantling comes after a dayslong standoff between city officials who tried to remove and store items from the hall and family members who refused to let them in before their demands were addressed.