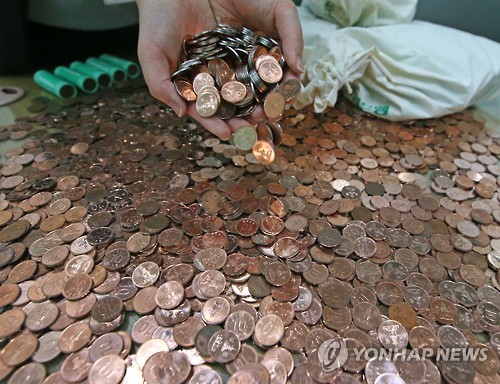 The business owner finally paid the back pay, but he made some of the payment in 10 won coins, apparently to show his disgust towards her. (image: Yonhap)

SEOUL, July 1 (Korea Bizwire) – Recently, Park, a 19-year-old part-time worker, came across a preposterous situation after she asked for back pay of 320,000 won from her previous employer.

Park worked at a bar as a part-timer for about two months since February, but she was not paid properly. She asked the owner of the bar for the back pay several times, but he kept on delaying the payment. Finally, she appealed to the Ulsan branch office of the Ministry of Employment and Labor.

As the ministry began investigating the case, the business owner finally paid the back pay, but he made some of the payment in 10 won coins, apparently to show his disgust towards her. Park had to bring 10,000 coins worth 100,000 won to the bank to change them to notes.

The bar owner even changed 400,000 worth of 10 won coins to pay the back wages of another part-timer, but the ministry interjected to prevent him from paying with the coins.

Such tyrannical behavior of business owners to part-timers has been reported before. In April, a restaurant owner in Gyeryong in South Chungcheong Province paid 180,000 won in back pay with 10 won coins to a worker who complained about the delayed payment to authorities.