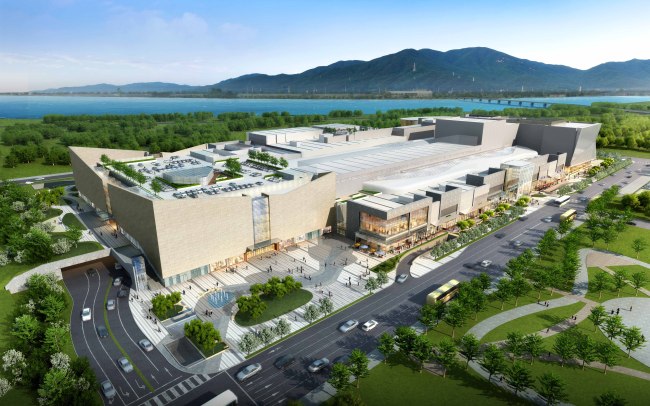 “Starfield Hanam” is a three-story building with four underground floors, covering an area spanning 460,000 square meters located some 20 kilometers southeast of Seoul. It’s equivalent to 70 football fields, big enough for visitors to day trip to without leaving the shopping mall that houses 750 brand stores and a parking space for 6,200 vehicles.

The 1 trillion won (US$916.5 million) joint investment with Taubman, a U.S. shopping mall owner and operator, is the Korean retail giant’s ambitious project to revitalize its offline retail channel in the face of tougher competition with emerging online and mobile malls.

“This is Korea’s largest suburban shopping mall that provides shopping, leisure and rejuvenating experiences in one place,” Lim Young-lock, vice president of Shinsegae Property, the group’s property development unit, said during a press meeting on Monday. “We hope that it will become the ultimate destination for a one-day shopping trip for customers in the Seoul metropolitan areas and potentially, across the nation.”

Starfield Hanam targets to post 820 billion in sales in the first year, hoping to raise it to 5 trillion won within 4-5 years, Lim said.

Women’s clothing stores as well as open cooking studios and ceramic workshops are located on the first floor, differentiating itself from traditional department stores that have cosmetic and luxury brands on the first floor.

On the second floor, about 30 luxury brands, including Louis Vuitton, Gucci and Prada, are lined up along with contemporary fashion brands.

Apart from other malls that mostly focus on shopping experiences, Starfield offers various options for men to see, experience and buy. 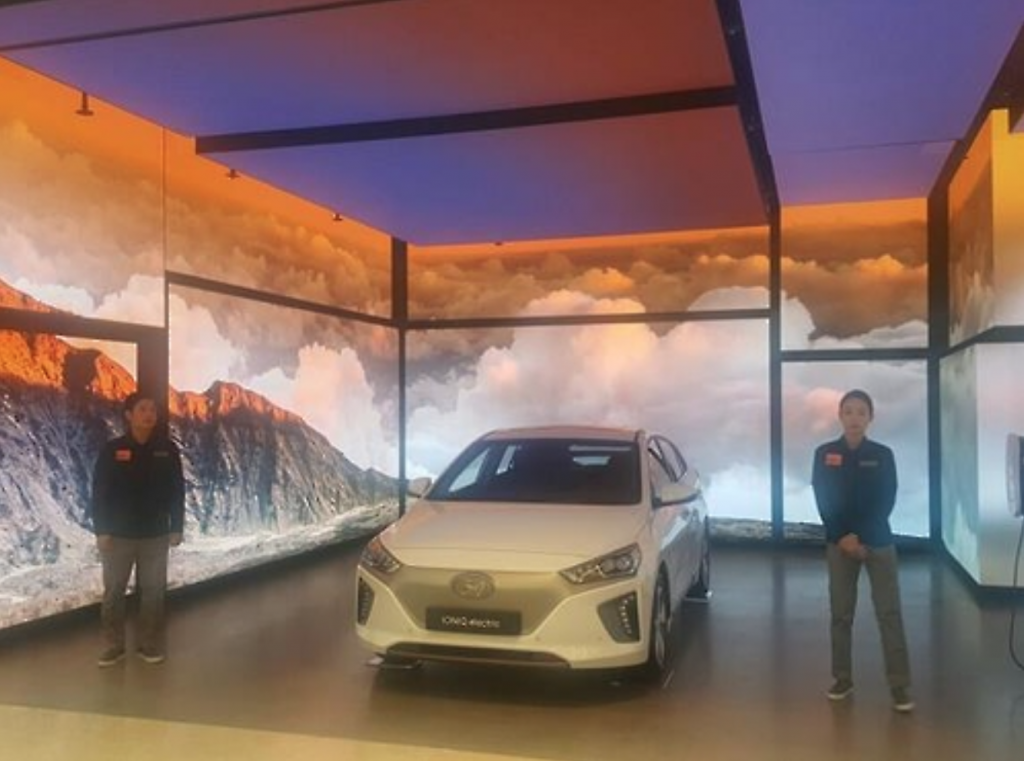 Hyundai Motor displays plug-in Ioniq model at its showroom at Starfield during a pre-opening event on Sept. 5, 2016. (image: Yonhap)

The Ioniq showroom features the Ioniq line, which includes the firm’s first pure electric vehicle built on a dedicated platform. In addition to the electric version, the Ioniq also comes in plug-in hybrid and traditional hybrid models.

Foreign automakers and motorcycles are also heating up the competition to attract male customers.

In November, American electric car maker Tesla Motors is set to launch its first dealership to prepare for its entry into the Korean market.

“Traditional shopping malls usually have a lack of options for male customers, but Starfield offers things to do and see for men like me, who like cars and electronic gadgets,” Kim Min-seok, a 24-year-old from Seoul, said during a pre-open event. “I’m looking forward to seeing Tesla’s electric cars when it opens a new shop.”

The shopping theme park has a lot to offer to family visitors as well.

Aquafield, an indoor and outdoor waterpark, and Sports Monster, an electronic sports field, are located on the third and fourth floor. 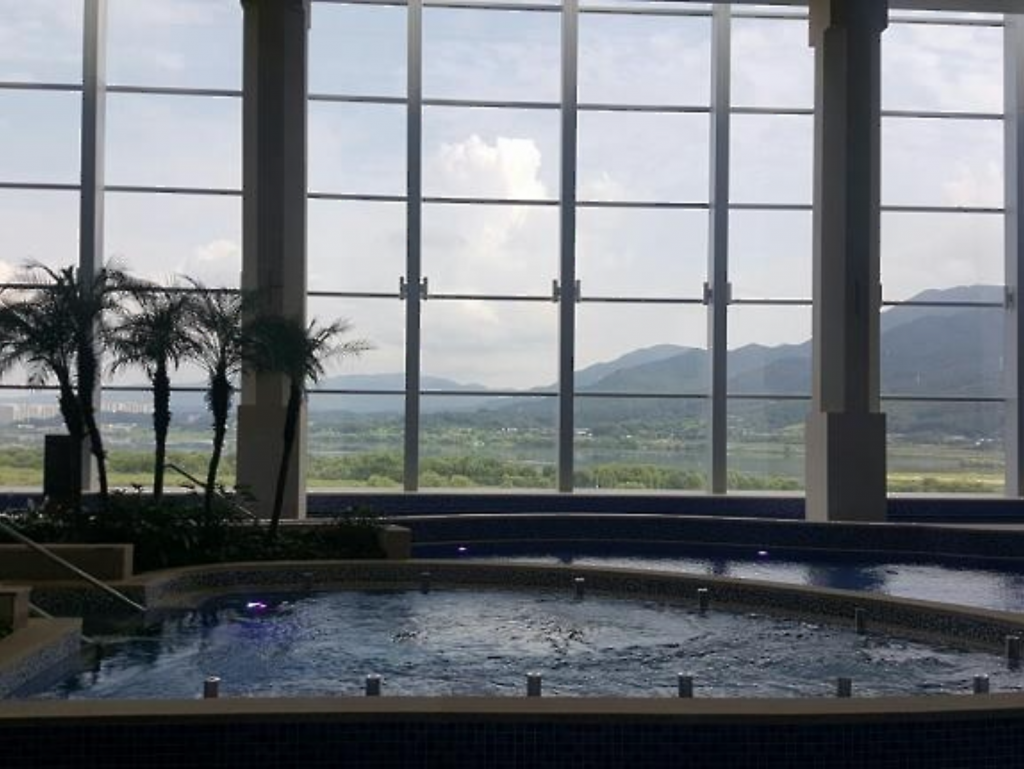 Aquafield covers an area of 13,000 square meters, with an indoor swimming pool that has a panoramic view of the Han River and the surrounding mountain, a water park and an upscale spa. (image: Yonhap)

Aquafield covers an area of 13,000 square meters, with an indoor swimming pool that has a panoramic view of the Han River and the surrounding mountain, a water park and an upscale spa.

At Sports Monster, people can enjoy basketball, volleyball and badminton as well as rock climbing and bouncing on a trampoline.

It also displays an “e-sports arena” that combines virtual reality (VR) gadgets and 4D technology for such sports as surfing, snowboarding, horse racing and rowing.

“I felt almost like I was falling from a cliff while getting on a roller coaster in this virtual reality,” Shin Min-hee, a 20-year-old, said, taking off a pair of VR goggles.

There are also various restaurants, cafes and desert places and a food market for fresh ingredients. 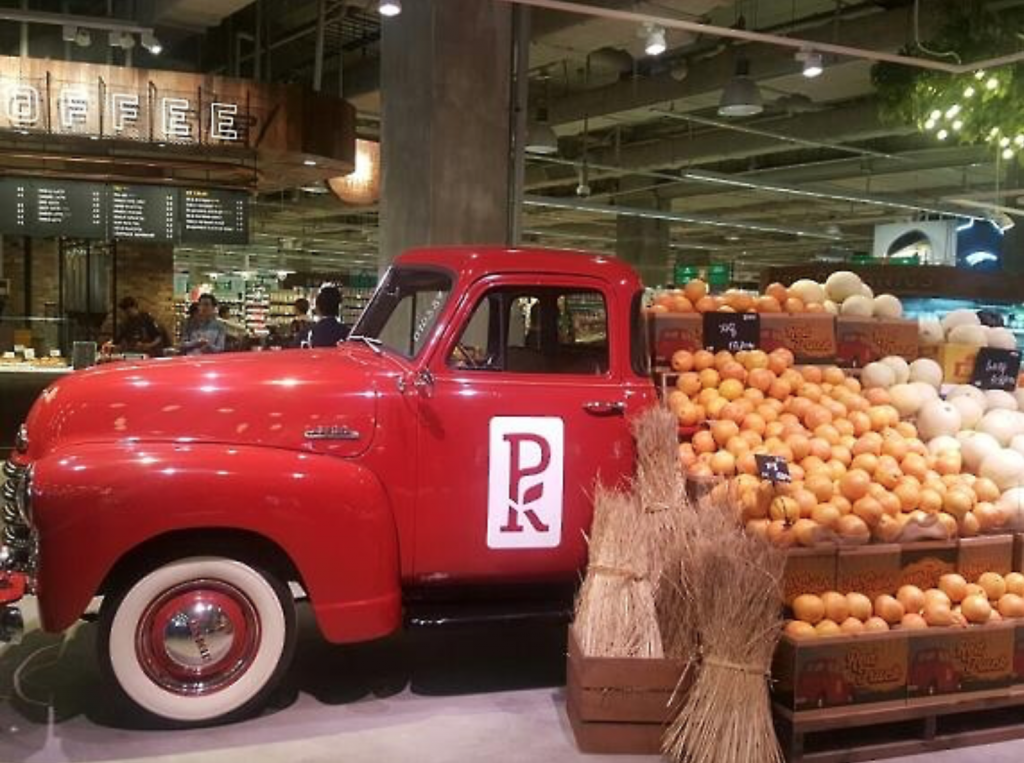 “Eatopia” (a compound for eat and utopia), and “Gourmet Street” feature branches of famous local and international restaurants.

“I was surprised to see many visitors even during the pre-opening events, which far exceeded my expectations,” said Lim, after touring the mall. “I hope Starfield can change customer expectations for an offline shopping mall through new experiences.”