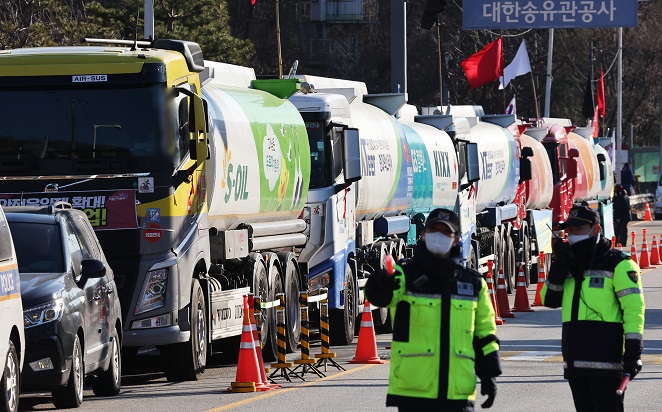 Fuel tankers are parked along a road near the Seoul office of Daehan Oil Pipeline Corp. in Seongnam, just south of Seoul, on Dec. 2, 2022. (Yonhap)

SEOUL, Dec. 3 (Korea Bizwire) — Shipments from major ports and cement production sites are recovering after days of disruptions over the truckers’ strike, the government said Saturday, as the walkout appears to be losing steam in the face of a tough government stance.

Container shipments from 12 major ports around the country had recovered to 82 percent of the average as of 10 a.m. Saturday, the Ministry of Land, Infrastructure and Transport said.

The shipment level had fallen to as low as 21 percent before the government issued an executive return-to-work order on striking cement truckers.

The Busan port in the southeast, the busiest port in the country, is back to normal with the shipments at 97 percent of the average.

Cement transportation had been recouped to around the 62 percent level as of late Friday.

But the major southwestern port in Gwangyang, about 300 kilometers away from Seoul, still remained at 0-3 percent.

Hyundai Steel was unable to ship 50,000 tons of daily product supply from five factories. The main steel complex in Pohang, some 370 km southeast of Seoul, has been forced to delay the supply of some 106,000 tons of steel products.

The strike is continuing for a 10th day, with no sign of a compromise over the pay scheme that truckers have demanded the government make permanent to guarantee the minimum wage.

The strike has caused major disruptions of shipments of cement and steel supplies and began to take a toll on the oil refinery sector.

Some 60 gas stations across the country had run out of fuel as of 2 p.m., Friday, with more gas stations to suffer the fuel shortage, the Ministry of Trade, Industry and Energy.

The government was expected to expand the return-to-work orders for fuel tanker and steel truck drivers, but it appears to have decided to dial down the tough stance amid a view that the strike is losing steam following the imposition of the first back-to-work order issued on striking cement truckers and the recovery in freight volumes.

The government said Friday it would start imposing penalties from early next week on the cement truckers who do not comply with the order.

Cement truckers will be suspended from work for up to 30 days for the first noncompliance, and lose their license if they do not comply for a second time.

Around 5,100 unionized truckers of the Cargo Truckers Solidarity Union, under the militant umbrella Korean Confederation of Trade Unions, were expected to continue the protest Saturday.