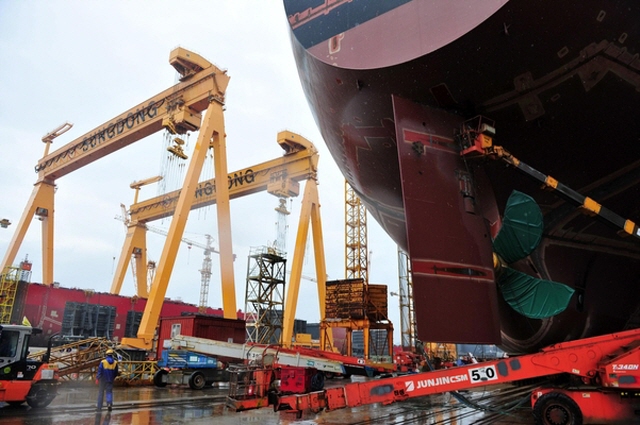 TONGYEONG, Apr. 27 (Korea Bizwire) — The Tongyeong municipal government said Wednesday it will build a complex of cultural and tourism facilities and a park on the site of a bankrupt shipyard in the port city.

ShinaSB has been under court receivership since last year as it was riddled with 1.84 trillion won (US$1.6 billion) in debt amid the country’s shipbuilding industry struggling with falling orders brought on by a global economic slump.

The Korea Development Bank (KDB), the creditor of the shipbuilder, has been contacting potential foreign buyers of the tower cranes and other facilities in the shipyard.

The state-run Korea Land Housing Corp. (LH) will then purchase the 43,000 pyeong (one pyeong equals 3.3 square meters) of land of the shipyard for the construction of the cultural complex in cooperation with the city government, according to an official of the government. The land price is estimated at 110 billion won.

Tongyeong has three bankrupt shipyards, including ShinaSB, with 27 tower cranes.

“The city government and LH both are well aware of the public opinion in regards to the tower cranes and against the building of apartments by private developers,” the official said. “We are seeking ‘public development’ of the land.”