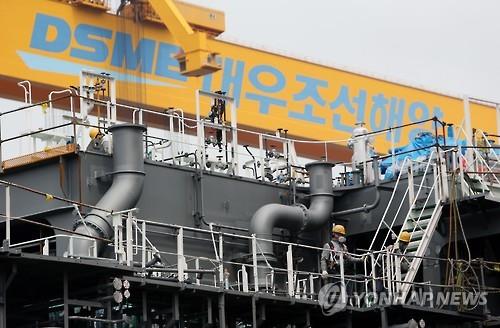 SEOUL, Apr. 29 (Korea Bizwire) — Unionized workers of two major shipbuilders in South Korea are set on a collision course with top managers over how to restructure the embattled companies reeling from snowballing losses amid a longstanding business slump, sources said Friday.

The labor union of Daewoo Shipbuilding & Marine Engineering Co. (DSME) is adamant against the government’s demands for additional restructuring measures, while union workers at Hyundai Heavy Industries Co. are strongly protesting a job-cut plan, according to the sources.

In a recent newsletter to its members, DSME’s trade union claimed that the latest government restructuring measures not only demand layoffs and pay cuts, but also deal a crushing blow to employees already suffering from job insecurity and lower wages.

“The government is trying to pass the buck to workers without holding the management accountable for huge losses,” the union said. “It is natural for unionists, who have worked hard for the company, to protest such a move.”

Announcing the action plan for a government-led restructuring drive on Wednesday, the Financial Supervisory Service, the country’s financial watchdog, demanded DSME take additional self-rescue measures, including more layoffs and an overhaul of its pay system.

Calling the government demands a clear breach of promise, the labor union has conveyed to the management its position that it is rejecting “pressure for more sacrifices.”

In return for 4.2 trillion won (US$3.7 billion) in financial aid in October last year, the labor union pledged to agree on a pay freeze, forgo industrial actions and positively accept demands from creditors until the company gets back on track. DSME also vowed to cut some 3,000 jobs over the next three years.

Strongly protesting the management’s unilateral restructuring move, the labor union of Hyundai Heavy Industries is also poised to embark on a full-fledged protest, according to the sources.

Hyundai Heavy Industries announced a plan Thursday to cut the number of directors at its affiliates by 25 percent during the first half, heralding the start of full-fledged downsizing.

Rumors are running rampant that Hyundai Heavy Industries may lay off about 3,000 workers within this year and freeze wages.

The labor union of Hyundai Heavy Industries said it will call for a pay raise and make other demands, while holding street rallies in a bid to make their voice heard.

Meanwhile, its two umbrella unions, including the Korean Metal Workers’ Union, recently said that they are ready to stage a general strike to protest layoffs and demand the guarantee of employment.

The restructuring of shipyards comes as the industry, once regarded as a driver of the country’s economic growth and job creation, has been suffering from mounting losses caused by an industrywide slump and increased costs.

With the world economy remaining in the doldrums, the shipbuilders have also seen their orders plunge. According to global researcher Clarkson Research Services, the three had an order backlog totaling 27.59 million compensated gross tons as of end-March, the lowest since March 2004.

South Korea is pushing to revamp its shipbuilding, shipping and other ailing industries in a bid to head off any fallout from their troubles on Asia’s fourth-largest economy struggling to tackle slumping exports and flaccid consumer spending.