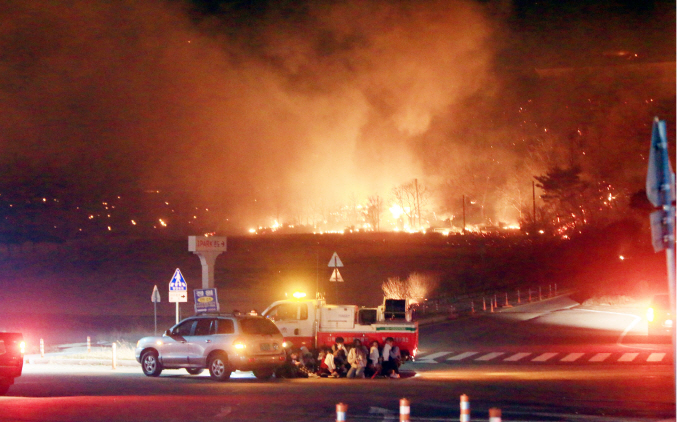 Fire strikes the northeastern border town of Goseong, located around 210 kilometers from Seoul, on April 4, 2019. (Yonhap)

SEOUL, Apr. 12 (Korea Bizwire) – A series of disaster-related bills have been proposed by the National Assembly amid frequent fires, including wildfires in Gangwon Province.

Rep. Kang Byong-won of the ruling Democratic Party announced on Thursday that he would propose a revision to the Act for Development of Broadcasting and Communications that requires broadcasters to provide sign language interpretation when broadcasting for the hearing-impaired.

Kang pointed out that in a recent disaster broadcast during a forest fire in Gangwon Province, hearing-impaired people had difficulty acquiring disaster-related information due to a lack of interpretation or visual presentation.

Kang also proposed a revision to the Framework Act on Disaster and Safety Management, which requires the government to consider whether to install wheelchair ramps, Braille blocks and visual alarms in consideration of the accessibility of people with disabilities when designating shelters across the country.

Meanwhile, Rep. Park Wan-soo of the main opposition Liberty Korea Party said he would push to propose a revision bill to the National Health Promotion Act that would designate traditional markets as non-smoking areas to prevent fires.

Park explained that markets should be designated as non-smoking areas in order to prevent second-hand smoke inhalation by merchants and customers, and there was a high risk of fire due to the density of stores.