SEOUL, May 25 (Korea Bizwire) — Kang Daniel, who debuted as a member of the now-defunct project boy group Wanne One, is back with cheerful songs Tuesday after a nearly three-year journey to find his true musical colors as a solo artist.

He droped “The Story,” his first full-length album with his last album, the EP “Color on Me,” being released in July 2019.

“This album depicted my own journey to find my true colors,” the singer said during a press conference held at a Seoul hotel to promote the album. “I wanted to create music that can be healing to others.”

The upcoming album consists of 10 songs, including the main single “Upside Down,” “Don Tell” and “Mad.” The main track is one fully charged with Kang’s own positive energy.

The 25-year-old singer confided that after his single “Yellow,” depicting a dark side of his inner mind, was released last year, he experienced hard times during promotional activities for the song.

“Looking back on my memories to figure out what song I enjoyed performing the most, I realized it was ’2U’ back in 2020,” he said, explaining why he chose to return to upbeat music.

“Staffers and dancers who work with me also said such a spirited song is a good match for me,” he said. “I think this feels the most like me and is my true musical colors.”

Kang then introduced “Upside Down” as a mid-tempo song meant to be comfortable to listen to and that is “particularly good to listen to behind the wheel.”

“There are days when you can’t do anything. The song is about one’s cute determination to turn everything upside down on such days. … But, as a person, I tend to just give up on days when things don’t go well,” he said, laughing. 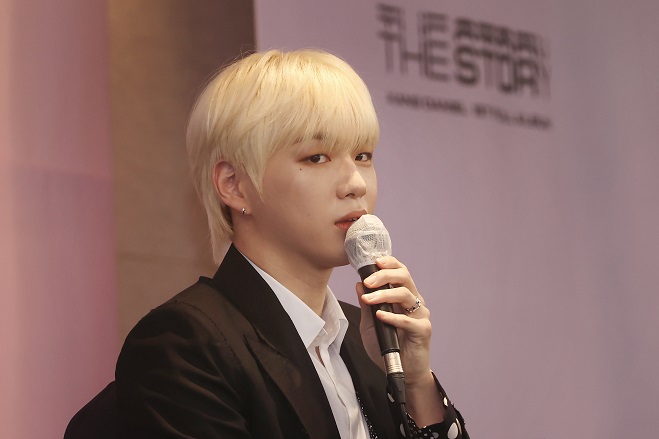 Singer Kang Daniel speaks during a press conference to promote “The Story,” his first full-length album, at a Seoul hotel on May 24, 2022. (Yonhap)

Kang once again showed off his B-boying skills, which he has put on the shelf for a long time, through the song.

It marked the first time for him to do B-boying since the second season of the survival audition show “Produce 101,” which skyrocketed him to stardom in 2017, according to the singer.

“It was really hard because I haven’t practiced B-boying since I filmed the audition program,” he said. “I’ll be able to show it to you on the stage of TV music programs for the first time in a long time.”

He explained that he stopped B-boying because he got hurt a lot.

“Although it leaves a lot of bruises and other marks on my body, I was more proud because my fans liked it.”