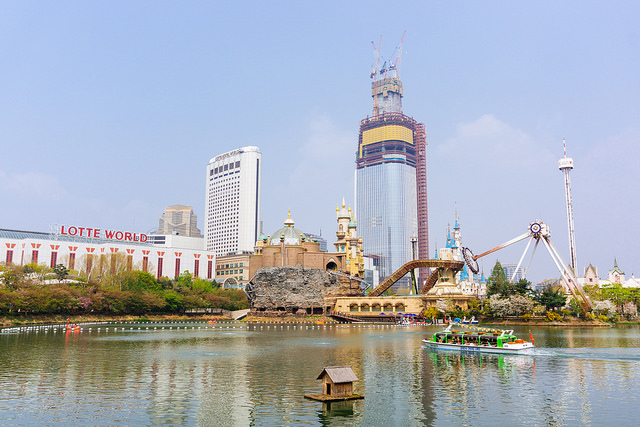 Beside the sinkholes, as a lake nearby Lotte World Tower is slowly disappearing, Songpa residents are glancing suspiciously at the tower. (image: Teddy Cross/flickr)

SEOUL, Aug. 7 (Korea Bizwire) – Another sinkhole nearby a skyscraper under construction adds an air of anxiety among residents of Songpa district, one of the most affluent regions in Seoul, where four sinkholes already appeared in two months.

On August 5, the latest sinkhole appeared in the middle of a six-lane street in Songpa District just one kilometer away from the Lotte World Tower construction site. The tower will be the world’s sixth tallest skyscraper upon completion in 2016.

To fill in the 8 meter-long, 2.5 meter-wide and 5 meter-deep sinkhole, as much as 140 tons of earth was used and the road was blocked for safety concerns. Now, the Seoul city government is investigating the causes of the sinkhole and points the subway construction works being done under the road as the main reason. However, it also considers as a cause ground subsidence due to the leaked groundwater near the skyscraper construction site.

Beside the sinkholes, as a lake nearby Lotte World Tower is slowly disappearing, Songpa residents are glancing suspiciously at the tower. As the water level of the lake dropped by 0.7 meter and the lake lost 150,000 liters of its water coincidently just after the beginning of construction works for the tower.

However, Lotte claimed that the sinkholes and the Lotte World Tower construction are not related to each other. An official at Lotte Engineering & Construction, the contractor of the tower, said, “We built 1-meter thick water barrier wall deep into the 26 meters underground, and we are consistently checking the underground water level. The underground water is properly controlled now.” 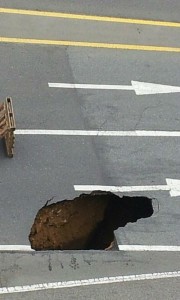 Lotte E&C explained that there is no possibility of sinkholes as the construction prevents the sudden drainage of underground water which causes sinkholes. Rather, it continued that the leakage of drain pipes caused the washout of the soil which led to the sinkholes. The Seoul city government also officially confirmed that the holes came from the washout by the drain pipe leakage.

However, despite the Lotte’s explanation and Seoul city’s confirmation, people’s sentiment eying the tower suspiciously is not easily allayed. A resident said, “People in the area feel uneasiness but they don’t speak out their worries for fear of the fall in housing price.”

Another resident who spoke on condition of anonymity said, “It’s better not to say about the issue as it will depreciate our house prices.”