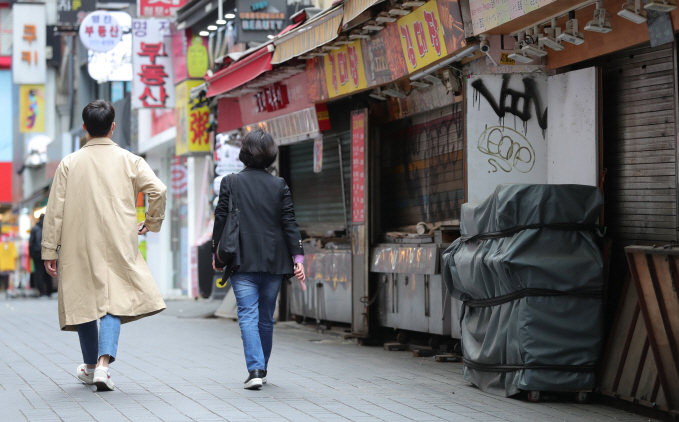 People walk past shuttered shops in Myeongdong, a popular shopping district in central Seoul, on May 19, 2020. (Yonhap)

SEOUL, May 26 (Korea Bizewire) — Falling tourist arrivals due to the new coronavirus outbreak is expected to dent the South Korean service industry’s added value and employment this year, a report said Tuesday.

Battered by the coronavirus pandemic, the number of foreign tourists to South Korea came to 2.04 million in the first quarter of the year, down 47 percent from a year earlier, according to the report from the National Assembly Budget Office.

In particular, the figure stood at a mere 83,000 in March, down a staggering 95 percent from the same month last year.

The report said the marked downturn in the number of foreign tourists could cause the local service sector’s added value to drop at least 0.3 percent on-year in 2020, or 2.4 trillion won (US$1.9 billion).

The industry’s employment could decline at least 0.4 percent, or 70,000 people, this year.

The estimates are based on the assumption that the monthly average of foreign tourists may be maintained at the same level as in March during the second quarter before rising to 50 percent the level of a year earlier in the third quarter and recovering fully in the fourth quarter.

Should the figures recover to 25 percent in the third quarter and 50 percent in the fourth quarter, the service sector’s added value could drop by up to 3.3 trillion won this year, with its hiring falling by 97,000.

According to the report, a 1 percentage-point gain in tourist arrivals is estimated to increase foreign consumption here by 0.9 percentage point.

The report called for timely government measures to provide support for businesses and regions that are expected to take a direct hit from declining tourist arrivals.

The novel coronavirus has infected more than 11,000 South Koreans and claimed 267 lives after its first case was confirmed on Jan. 20.