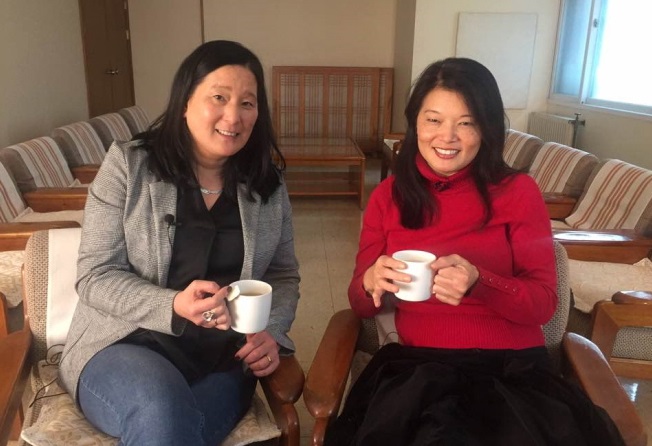 DAEGU, Feb. 18 (Korea Bizwire) — Two South Korean-born sisters, who were abandoned as infants and sent abroad by an adoption agency in the early 1970s, were reunited in Daegu on Monday after living separately in North America and Europe for nearly five decades.

American Christine Pennell, 49, and Belgian Kim Haelen, 47, were reunited at Daegu Station in central Daegu, about 300 km southeast of Seoul, at 11 a.m. on the day after 47 years apart.

Pennell and Haelen were abandoned at the city’s Banyawol Station in November and Daegu Station in December, both in 1971, respectively, before being adopted by families in the United States and Belgium the following year.

The two then had lived without knowing about the existence of each other until last year, when they had genetic tests for personal reasons and the test companies said there was another person with 100 percent identical genetic information.

The two sisters have since communicated across the Atlantic and recently visited South Korea to trace their family members in Daegu.

They cried for a long while hugging each other.

They were amazed to learn that they share the hobby of dancing and a dislike of fish, and at the similarities of their faces and hands.

The sisters then expressed their wish to meet with their birth parents.

Pennell, who currently works for a law firm, said she is unaware of the circumstances of her abandonment in 1971, but wants to meet her parents even just once.

Haelen, an educator for disabled people, said she imagines her birth mother as a cheerful and kind person, like her elder sister.