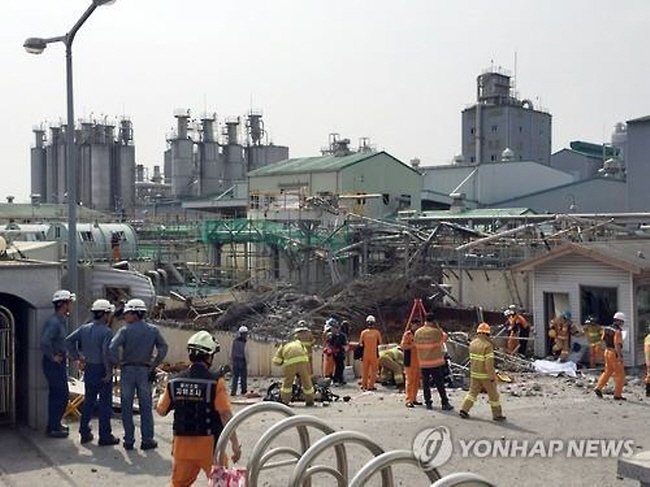 Fire officials investigate the scene of a chemical explosion that occured around 9:19 a.m. on July 3rd, 2015, at a chemical plant run by Hanwha Chemical Co. in Ulsan. (image: Yonhap)

ULSAN, Jul. 3 (Korea Bizwire) — Six workers were killed and another one was injured Friday when an explosion occurred at a chemical plant in the southeastern coastal city of Ulsan, fire officials said.

The blast occurred at around 9:19 a.m. when the workers were doing welding work on a storage tank containing waste at the factory run by Hanwha Chemical Co., they said.

The officials suspect that a welding spark came in contact with a heat source, mainly methane and biochemical gas from the storage, triggering the blast.

An investigation is under way to determine the exact cause of the accident, they said, adding that they will look into whether the explosion was the result of negligence by the workers.

The Ulsan plant mainly produces polyvinyl chloride (PVC), a plastic used in a wide range of products. It is the second-biggest chemical factory operated by Hanwha Chemical.’