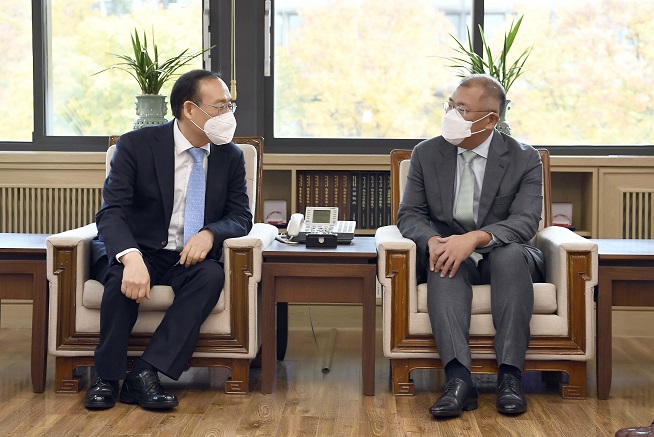 Chung Eui-sun (R), chief of South Korea’s Hyundai Motor Group, and Oh Se-jung, head of Seoul National University (SNU), talk during a signing ceremony for an agreement on the setup of a center for joint battery studies at the school in Seoul on Nov. 3, 2021, in this photo provided by the carmaker.

On Wednesday, the two parties signed a memorandum of understanding for the establishment of a center for joint battery studies and the promotion of mid- and long-term joint research programs.

The joint research will focus on next-generation battery technology that can greatly extend the driving distance of EVs as well as reduce charging hours.

Hyundai plans to invest more than 30 billion won (US$25.4 million) over the next 10 years in the venture.

In particular, it will establish an exclusive research space and install state-of-the-art experiment equipment at Seoul National University by the end of next year.

Professor Choi Jang-wook, a globally-renowned scholar in battery technology, was appointed to lead the center.

As many as 15 professors from various domestic universities, including Seoul National University, and more than 100 professionals with PhDs or master’s degrees will take part in the research.