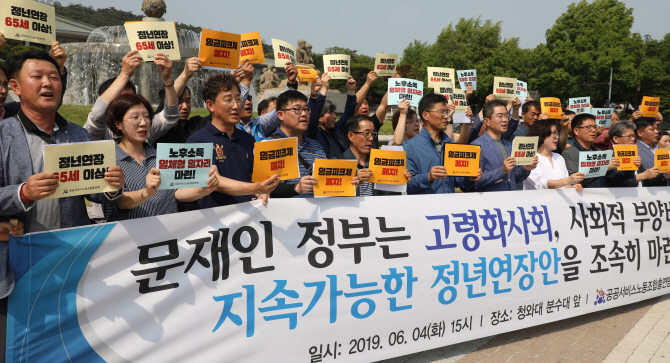 Unionized public service workers holding a news conference in front of Cheong Wa Dae in Seoul on June 4, 2019 to call for extending the legal retirement age from 60 to 65. (Yonhap)

The poll of 1,539 adults aged 19 to 64 conducted by the Korea Institute of Public Administration from Sept. 2-11 found that 61.1 percent are in favor of extending the retirement age.

Only 19.6 percent opposed the retirement age extension, while another 19.3 percent said they don’t have an opinion on the issue.

It also found 66.9 percent of the respondents agreeing to the view that the extension of the retirement age will be helpful to resolving the aging society’s problems, whereas 15.1 percent voiced the opposite view.

According to the state-run agency, four out of 10 respondents agreed to the view that the retirement age extension will negatively affect the job market for youth, with 30 percent of them expressing the opposite view.

Debate on whether to extend the nation’s legal retirement age has heated up after Finance Minister Hong Nam-ki recently announced the formation of a government task force to study the extension in the face of rapid demographic change and a shrinking workforce.