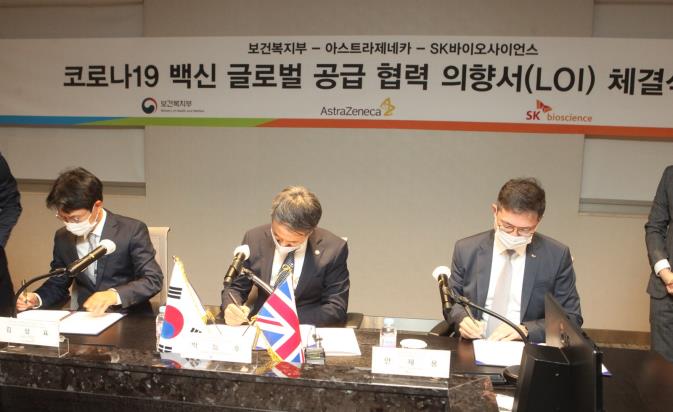 Representatives from SK Bioscience, AstraZeneca and the health ministry take part in an LOI signing event in Pangyo, south of Seoul, on July 21, 2020, in this photo provided by SK Bioscience.

The letter of intent (LOI) reached between the two companies and the Ministry of Health and Welfare calls for close cooperation on supplying the AZD1222 material for both domestic and global markets, SK Bioscience said.

The agreement, moreover, outlines the need for swift and stable production, and the building up of manufacturing capabilities to cope with a possible spike in demand and use of the material in South Korea.

AZD1222, which is being developed in cooperation with Oxford University, has generated keen interest across the world, as it is the first vaccine material to be given permission to conduct phase III clinical tests.

The British university and the multinational bio research firm said earlier phase I and II tests showed the material to be safe to use, with people given the material developing neutralizing antibodies and T cells.

SK Bioscience said it has also signed a contract manufacturing organization contract with AstraZeneca that opens the door for it to play a role in the extended vaccine production program going forward.

The company said it will be tasked with making the AZD1222 main substance at its vaccine manufacturing facility in Andong, 270 kilometers southeast of Seoul, with its partner responsible for international distribution.

It said the pact goes into effect this month and runs through early 2021, with SK Bioscience to be given more work if the candidate material is made into a COVID-19 vaccine. 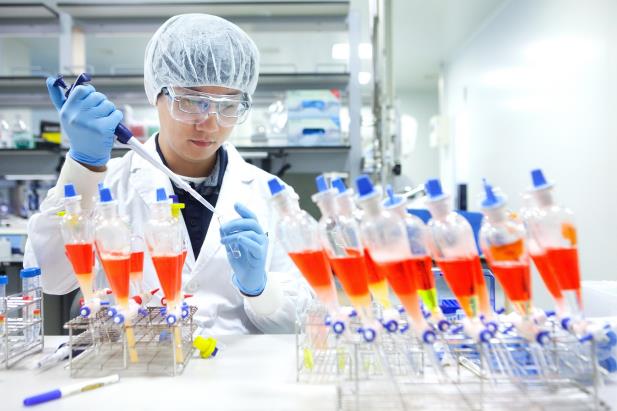 The health ministry said it has played a part in facilitating two-way talks and stressed it will support production and export of the vaccine going forward.

The Ministry of Food and Drug Safety, in charge of regulating all treatment drugs, plans to hold talks with AstraZeneca so the vaccine material can be brought into the country.

“SK Bioscience has extensive know-how in the production and research of vaccines, along with good production capability,” Ahn said after the LOI was signed.

He added that every effort will be made to develop the COVID-19 vaccine and it will work closely with the health ministry and government.