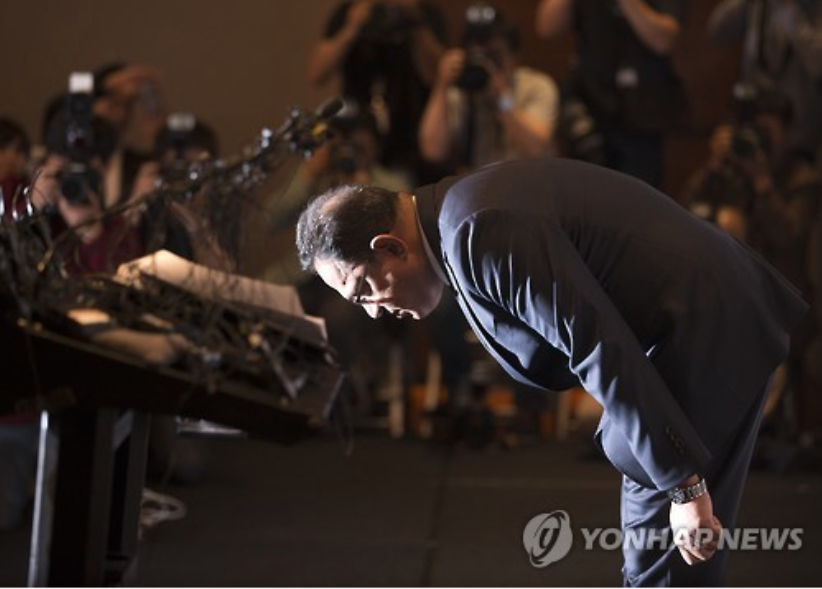 Ata Safdar, the head of Oxy Reckitt Benckiser Korea, bows deeply before a news conference at a Seoul hotel on May 2, 2016, to apologize to and vow compensation for the victims of its toxic humidifier sterilizer amid a prosecution probe into the Korean unit of the British firm. (image: Yonhap)

SEOUL, May 9 (Korea Bizwre) – Years of exposure to humidifier sterilizers increased the risk for severe lung damage in users by 116 times more than in those not exposed to the chemicals, a state health agency said Sunday.

In August 2011, when the government acknowledged a connection between lung problems and the chemicals used to clean household humidifiers, the Centers for Disease Control and Prevention (CDC) began a survey to investigate the levels of lung damage in 16 people who argued their condition was due to the humidifier sterilizers. The control group was comprised of 60 same-age, same-gender peers who lived in the same neighborhoods but didn’t use the sterilizers.

Instead of releasing the survey results, the CDC belatedly announced them in the form of a thesis in the U.S. science journal of PLOS one in 2015. It sparked criticisms that it should have revealed the results sooner given the severity of the lung damage in affected consumers.

Most of the victims used humidifier sterilizers made by Britain’s Oxy Reckitt Benckiser.

Oxy is currently being probed by state prosecutors over its toxic humidifier sterilizers that have been cited for causing many deaths and illnesses. Oxy started selling its products here in 2001.

Korea confirmed 221 people as victims. Among them, 177 had used Oxy products. Out of 90 deaths, 70 are believed to have been using Oxy products.

In early May, Oxy Korea CEO Ata Safdar made an official apology and vowed to fully cooperate with the Korean government in the ongoing investigation. Now the focus is on whether the company’s high-ranking executives approved the sales of its disinfectants while knowing the health risks.

Prosecutors reportedly plan to summon several foreign executives, including former CEO John Lee, definitely involved in key management decisions at Oxy Korea in mid and late 2000s. They are suspected of pushing forward sales of the toxic products despite consumer complaints about side effects.