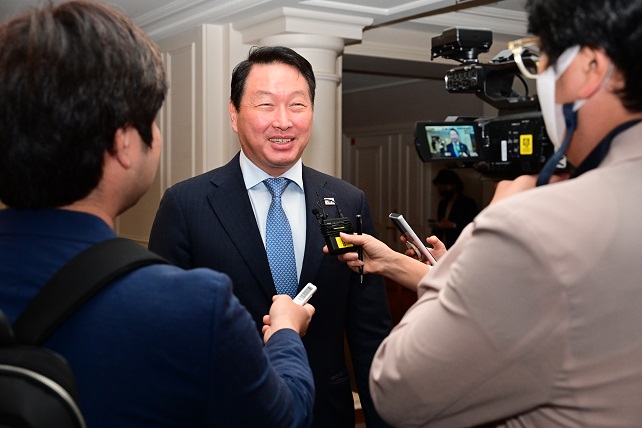 SK Group Chairman Chey Tae-won, who also serves as the chairman of the Korean Chamber of Commerce and Industry, speaks to reporters in Paris on June 20, 2022, in this photo provided by the Prime Minister’s Office. Chey visited the city as part of a South Korean delegation campaigning for the 2030 Busan World Expo bid.

During the three-day trip from Wednesday through Friday, Chey met with Kenichiro Yoshida, CEO of Sony Group Corp.; Akira Shimada, president of Nippon Telegraph and Telephone Corp. (NTT); and Yasuhiro Sato, former chairman at Mizuho Financial Group, among others, according to the sources familiar with the matter.

Chey discussed with them how to boost cooperation and explore fresh opportunities to work together in semiconductors, electric vehicle batteries and artificial intelligence — key areas that SK, South Korea’s No. 2 conglomerate, has been focusing on as new future growth drivers.

On Wednesday, SK Inc. Materials, an advanced materials unit of SK Group, announced a plan to push for expansion into North America with Japanese chemical company Showa Denko K.K. on semiconductor materials, such as etching gas.

The chamber chairs’ meeting has been suspended since 2018 amid deterioration in bilateral ties after Tokyo implemented export restrictions against Seoul over industrial materials vital to the South’s tech sectors.

Hopes have arisen for improvement in the bilateral relations and economic exchanges as the new government of President Yoon Suk-yeol, who took office in May, has called for mending ties in a future-oriented manner to benefit both countries.

In meeting with Minura, Chey also asked for support from the Japanese business circles for Seoul’s bid to host the 2030 World Expo in Busan. Chey is also serving as a co-head of a committee in charge of the Expo campaigns.