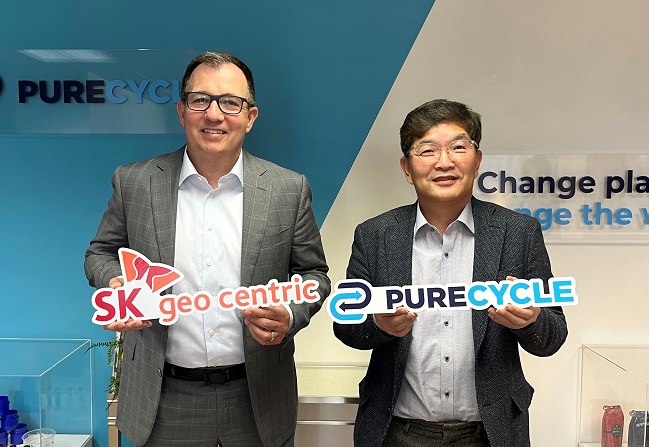 SK Geocentric CEO Na Kyung-soo (R) poses for a photo with PureCycle Technologies CEO Mike Otworth at the latter’s company headquarters in Florida, the United States, in November last year, in this photo provided by SK Geocentric on March 15, 2022.

SEOUL, March 15 (Korea Bizwire) — SK Geocentric Co., a chemical materials unit of South Korean conglomerate SK Group, said Tuesday it has acquired a stake worth US$55 million in a U.S. plastic waste recycling startup, in a step to bolster its green business.

It acquired the stake in PureCycle Technologies Inc., a Florida-based plastic recycling company, through a recent rights offering, SK Geocentric said in a release, without disclosing details on the size of the stake.

SK Geocentric has already partnered up with PureCycle to build a polypropylene recycling factory in the South Korean industrial city of Ulsan, about 400 kilometers southeast of Seoul.

The factory will have a processing capacity of 64,000 tons a year. The two companies plan to complete the construction by end-2024.

PureCycle is building a production line in Ohio capable of producing 50,000 tons annually and plans to set up a factory in Georgia that will have an annual production capacity of 300,000 tons, according to SK.

PureCycle specializes in recycling polypropylene waste into ultra-pure polypropylene resin by removing contaminants, which can be reused in various consumer goods, as well as automotive and construction materials.

SK Geocentric, formerly SK Global Chemical, has said it plans to invest 5 trillion won ($4.02 billion) by 2025 to transform its business portfolio from petrochemicals to green products, aiming to expand the plastic waste recycling capacity to an annual 900,000 tons.