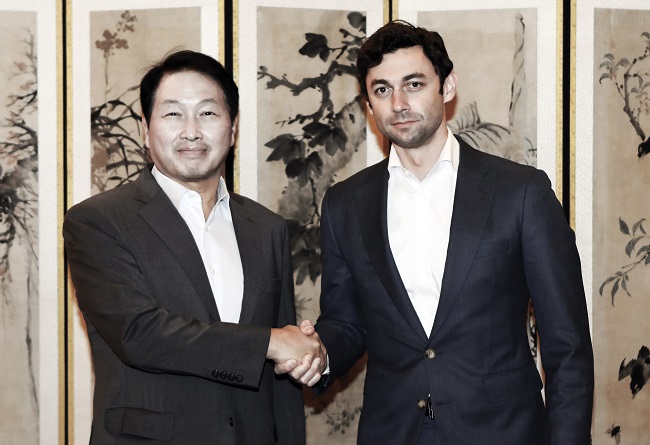 The meeting with Senator Jon Ossoff (D-GA) on Monday came as SK has been ramping up investment in America with its EV battery, hydrogen and other eco-friendly businesses in a move to join U.S. emission-reducing efforts.

In the U.S. state of Georgia, SKC Co., a chemical unit of SK Group, South Korea’s No. 3 conglomerate, is investing US$80 million to build a glass substrate manufacturing plant.

At the meeting, Chey stressed that SK Group plans to continue efforts to contribute to reducing gas emissions, building a stable battery supply chain and creating jobs in the U.S. through bold investment in eco-friendly businesses, such as batteries and hydrogen, according to SK.

Chey also explained the glass substrate for semiconductor packages to be produced in Georgia is a future-oriented advanced material that can dramatically increase data while cutting power consumption by half.

Ossoff, in turn, expressed appreciation for SK’s efforts to help revitalize the economy in Georgia and promised to continue support for cooperation not only at the state level but also between the two countries, according to SK.

The meeting follows Chey’s recent visit to Washington D.C., where he had a series of meetings with U.S. lawmakers and other officials to discuss business cooperation. Chey said SK will spend about $52 billion for U.S. investment by 2030.