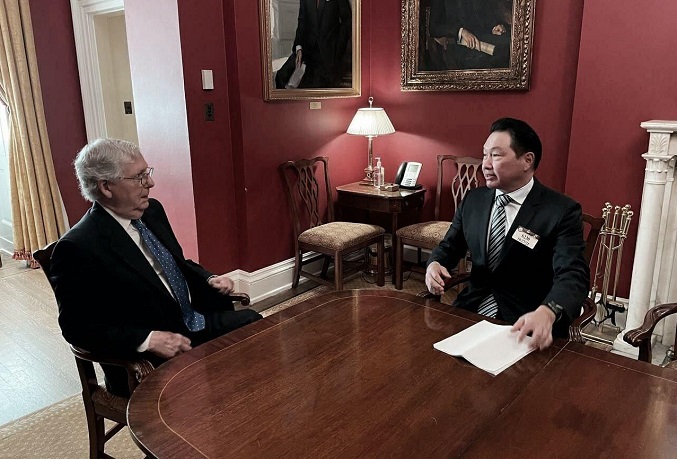 SEOUL, Nov. 2 (Korea Bizwire) — SK Group Chairman Chey Tae-won has vowed to spend about US$26 billion on electric vehicle (EV) batteries, hydrogen and other eco-friendly businesses in the United States in a move to join U.S. efforts to reduce greenhouse gas emissions.

Chey said SK is aiming to cut carbon emissions of 200 million tons, which account for 1 percent of the global target of reducing carbon dioxide emissions of 21 billion tons by 2030.

He said SK’s “green businesses” could contribute to the U.S. efforts to reduce greenhouse gas emissions, which scientists say are to blame for global warming.

Carbon neutrality has gained urgency around the world amid warnings of global warming and its environmental consequences.

Chey made a six-day trip to Washington, D.C. that ran through Monday in the latest outreach activities to U.S. political and business leaders.

Chey held video talks with Ford CEO Jim Farley and reaffirmed efforts to work together for the completion of their joint battery plant construction.

SK On, SK Group’s new battery unit, has been building a battery plant in Kentucky and another one in Tennessee with Ford Motor Co. in a $11.4 billion deal.

The plants will have a combined annual production capacity of 129 gigawatt hours, enough to produce 2.15 million EVs per year. SK On is investing $4.45 billion in the project.

Chey met with Senators Marsha Blackburn (R-Tenn.) and Bill Hagerty (R-Tenn.), and asked for their attention and support for the battery plants.

The senators held out expectations that SK’s battery business will contribute to the stability of the U.S. battery supply and establishment of a green battery ecosystem, according to SK.