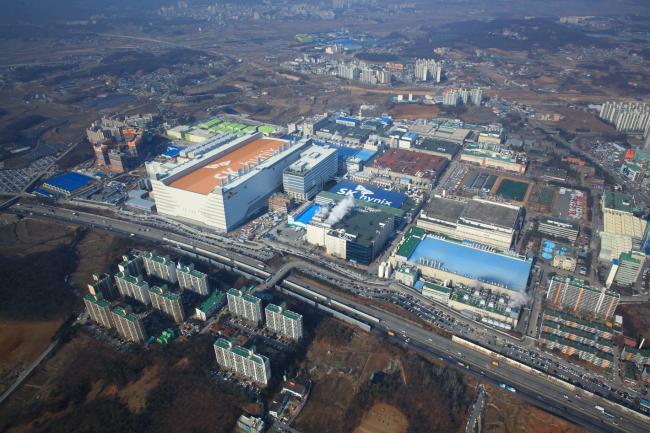 SK hynix completed the new line called M14 at a cost of 2.38 trillion won about one year after ground was broken. The world’s No. 2 memory chip maker will invest a total of 15 trillion won in the plant. (image: SK hynix)

SEOUL, Aug. 25 (Korea Bizwire) – South Korean chip giant SK hynix said Tuesday it will spend 46 trillion won (US$38.2 billion) to build three new semiconductor production lines over the next 10 years in an effort to bolster its market position and join government efforts to revitalize the economy.

SK Group Chairman Chey Tae-won unveiled the ambitious investment plan at a dedication ceremony for one of the new chip plants in Icheon, 80 kilometers southeast of Seoul, which was also attended by President Park Geun-hye and other key figures.

SK hynix completed the new line called M14 at a cost of 2.38 trillion won about one year after ground was broken. The world’s No. 2 memory chip maker will invest a total of 15 trillion won in the plant, and is expected to produce a maximum 200,000 sheets of 300mm dynamic random access memory (DRAM) wafers on a monthly basis as its capacity will improve over the years.

The M14, built on a lot about the size of seven football stadiums, will start operations next month with a monthly production capacity of 3,000 sheets.

The remaining 31 trillion won will be invested in building two more chip plants — one in the same province as the M14 and the other in the southern region of Cheongju — by 2024.

“I’d like to express my gratitude to everyone including the government, communities and our partners who have extended their support for the completion of the new plant. We’ll make utmost efforts as a leading company to live up to your expectations in the years ahead,” Chey said in a speech.

SK Group acquired the chip company, formally known as Hynix Semiconductors, in 2012, on the back of Chey’s strong drive for the key material used in almost all electronic devices.

Since the takeover, SK hynix has become a pivotal unit in the group by making a significant leap in its earnings. Its first-half operating profit reached a record-high this year on robust sales of its flagship DRAM chips.

SK hynix’s bold investment plan is also seen as part of Chey’s efforts to join the government drive to revitalize the slowing economy, after he was freed from prison two weeks ago upon receiving a special presidential pardon.

Chey had been serving a jail term since 2013 after he was convicted of embezzlement. Following his release on Aug. 14, he has been bustling up to actively respond to government calls to create more jobs and jack up spending.

SK, the third-largest conglomerate in South Korea whose businesses range from telecommunications to oil refining, has pledged to make more contributions to society as the public remains hostile against the government’s bid to give pardons to conglomerate leaders.

Chey has visited not only key group affiliates, but also dropped by some of the state-led startup incubation centers, promising to assist in nurturing venture firms.

A study by a local research institute showed that the M14 will likely induce 5.1 trillion won worth of production, creating some 59,000 jobs in the region.