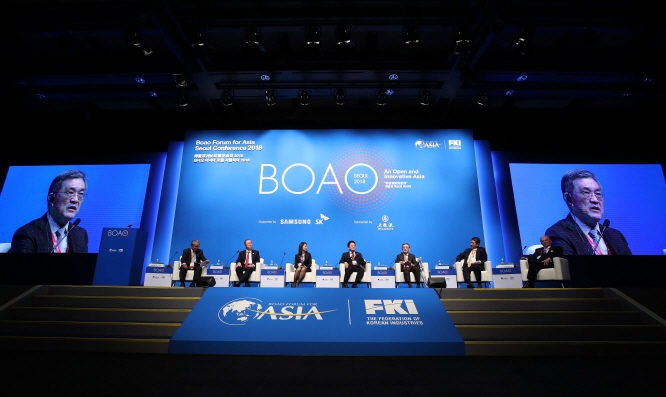 Kwon Oh-hyun, chairman of Samsung Electronics, gives a presentation during a Seoul conference of the Boao Forum for Asia on Nov. 20, 2018. (Yonhap)

Commonly referred to as the Asian edition of the Davos Forum, the conference is scheduled from March 26-29 in Boao of Hainan Province under the theme “Shared Future, Concerted Action, Common Development.”

Chey Tae-won, chairman of SK Group, and Kwon Oh-hyun, chairman of Samsung Electronics, are among the 129 invited guests to the forum as of Friday, according to the officials.

The two were among the invited attendees at last year’s forum, along with Chey’s younger brother Jae-won, the vice chairman of SK Group.

Ban Ki-moon, former secretary-general of the United Nations, will attend as the chairman of the forum. He was elected to the post last year.

Lee Jae-yong, vice chairman of Samsung Electronics who served on the forum’s board until April last year, is not on the list of invitees but may still attend during his overseas business trip, officials said.