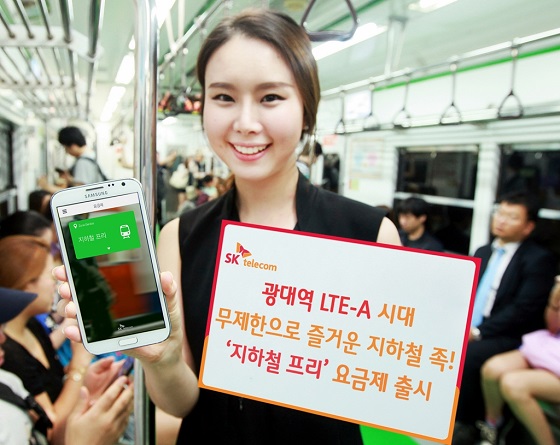 With this plan, subscribers can enjoy up to 2 gigabytes of data a day, with no charge for extra data. Any user who has exceeded the limit can keep enjoying the service at the speed of 400 Kbps.(image:SK Telecom)

SEOUL, June 30 (Korea Bizwire) – The customers of SK Telecom will be able to go to work more pleasantly. The largest mobile telecom service operator said on June 30 that it would launch a new rate plan “Subway Free” by which subscribers can use an unlimited amount of data at subway trains and platforms within the Seoul Metropolitan area at the flat monthly price of 9,000 won.

With this plan, subscribers can enjoy up to 2 gigabytes of data a day, with no charge for extra data. Any user who has exceeded the limit can keep enjoying the service at the speed of 400 Kbps. All monthly fixed-rate LTE subscribers are eligible to sign up for the Subway Free plan.

According to an in-house data traffic analysis for the month of May by SK Telecom, as much as 5-10 percent of data is in use within subway trains and platforms. In another data made available by Seoul Metro, the cumulative number of passengers for its Nos.

1-4 Subway lines during the month of February this year was 40 billion, with the daily average passenger number reaching 4.2 million. That bodes well for the mobile telecom service provider’s Subway Free plan. The company will gradually expand the available area to cover the whole country’s subway lines by the end of July.

From now on, SK Telecom subscribers can enjoy a variety of multimedia contents on their smart devices during the dreary subway ride with the three-time faster broadband LTE-A services.

To celebrate the launch of the new service, the company will offer a promotional rate of 5,000 won a month for those subscribers who sign up for the plan by September 30. The subscribers who have signed up can benefit from the same rate as long as they maintain their accounts.