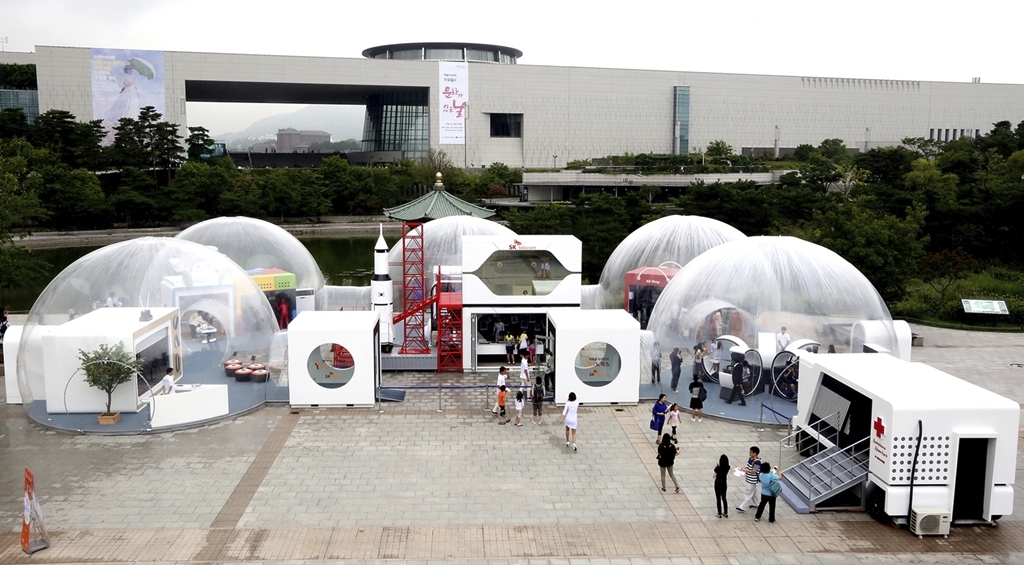 Seoul, Korea, Aug. 20 (Korea Bizwire) – SK Telecom (NYSE:SKM) announced today the launch of a year-long tour of T.um Mobile, a traveling ICT museum project, as part of a campaign to address  Korea’s  regionalized  digital  divide  and  educate the country at large about the telecommunications industry’s upcoming technologies. The project’s official launch will be held at the National Museum of Korea in Seoul from August 20th to 23rd.

T.um Mobile is a new traveling version of T.um, SK Telecom’s current ICT museum, located at the company’s headquarters in Euljiro, Seoul. Since its opening in 2008, T.um has welcomed nearly 57,000 visitors including telecommunications industry representatives, tourists, and students from home and abroad.

As students are one of the current T.um museum’s main audience groups, SK Telecom created the T.um Mobile tour with the goal of narrowing the educational opportunity gap between urban and rural regions. Rural tour stops will focus on schools and student groups.

T.um Mobile is one of SK Telecom’s initiatives created this past May in celebration of the company’s 30th anniversary. The project was designed to be easily moved and re-constructed virtually anywhere.

T.um Mobile’s content was developed to allow young people to easily grasp concepts by illustrating  the  past, present and future of Korea’s information and communications technologies in four different experiential sections.

In addition, T.um Mobile will be accompanied by a virtual museum that has been jointly created by SK Telecom and the National Museum of Korea. The first of its kind in the world, the exhibit will use AR equipment to demonstrate pre-eminent works displayed in the National Museum of Korea while a museum curator explains the history behind the objects and leads a discussion session.

During its one-year tour, T.um Mobile will travel to 20 locations. Following its opening at the National Museum of Korea, T.um Mobile will visit the 17th Asian Games Incheon (Sept.19 – Oct. 4) and the 2014 ITU Plenipotentiary Conference in Busan (Oct. 20 – Oct. 23), followed by visits to rural areas such as Haenam in Jeolla province and Taebaek in Gangwon province.

Yoon Yong-chul, Executive Vice President and Head of the Public Relations Office at SK Telecom, stated, “SK Telecom developed the T.um Mobile project with the goal of bridging Korea’s digital divide. T.um Mobile aims to create a more human-focused ICT environment that emphasizes technology we need rather than just technology that performs well. We hope that the T.um Mobile tour will inspire our young students in particular.”