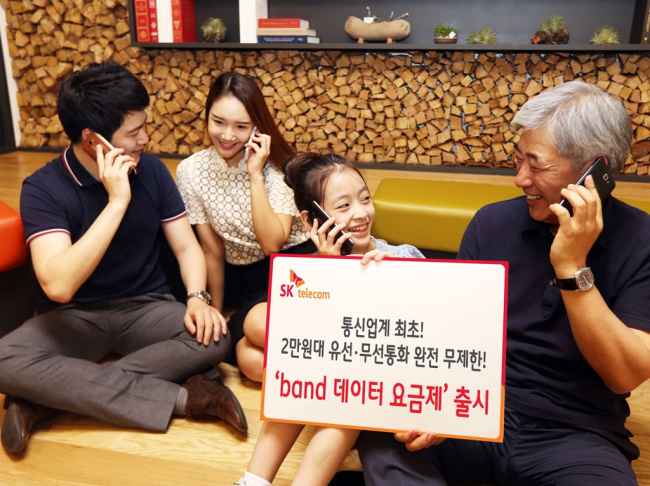 SK Telecom said in a statement that it will start selling the new data-oriented rate plan nationwide on May 20. (image: SK Telecom)

SEOUL, May 19 (Korea Bizwire) – SK Telecom, South Korea’s top mobile carrier, said Tuesday it will start selling a new rate plan that offers unlimited calls and text messages and charges only based on the amount of downloaded data, joining the race with two local rivals as mobile trends shift to data-focused services.

The mobile carrier said in a statement that it will start selling the new data-oriented rate plan nationwide Wednesday.

The announcement came a week after smaller rival LG Uplus rolled out a similar rate plan. KT, the second-largest player in the country, was the first to have introduced the new rate offer to the market early this month.

SK Telecom’s data-based rate plan is similar to its rivals’ versions. The package comes in eight different types of rate plans to choose from, with standard monthly rates ranging from 29,900 won (US$27.4) to 99,000 won. Each rate plan will be given a different amount of data available for downloading, according to the company.

The industrywide move to adopt the new rate plan is unprecedented for South Korean mobile carriers, who have depended heavily on profits from subscriptions that include the amount of phone calls made by users.

Market watchers said a rapid growth in mobile data consumption, backed by the widespread smartphone usage, has sparked the need for mobile carriers to revamp their rate offers from a more up-to-date perspective.

The latest statistics by the ICT ministry showed that the monthly data traffic among 4G users has surged nearly sixfold in the last four years as of end-2014.

South Koreans have been shifting to the long-term evolution (LTE) network from 3G, as they spend more time on mobile devices watching video streaming instead of making phone calls or sending text messages.