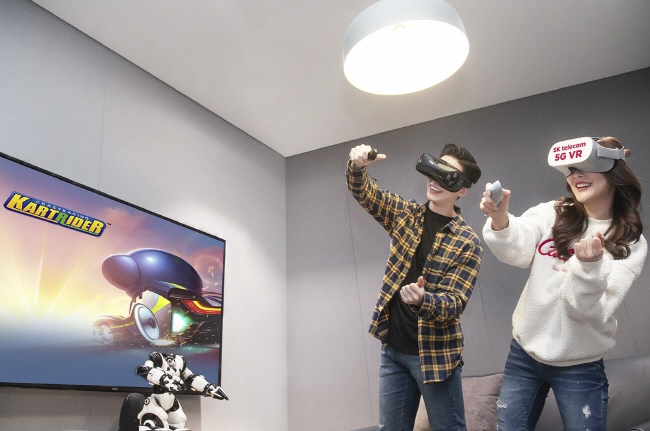 Models enjoy a virtual reality kart racing game developed by SK Telecom Co., which will be officially launched in the first half of 2019. (image: SK Telecom)

SEOUL, Feb. 19 (Korea Bizwire) — South Korea’s No. 1 mobile carrier SK Telecom Co. said Tuesday it will launch a virtual reality (VR) racing game for 5G smartphones in the first half of this year.

SK Telecom said it has signed a licensing agreement with the nation’s leading game developer, Nexon Co., to use three of its popular online games — KartRider, Crazy Arcade and Bubble Fighter — for development of its VR game.

With support of the enhanced network, the new VR game will provide unprecedented immersion thanks to 5G smartphones’ ultra-high speed and low latency, the company said.

The telecommunication company has been exploring partnerships with game and media companies to develop “killer content” for 5G smartphones, which are set to hit the domestic market next month.

SKT said it plans to sign various agreements with global game developers to create 5G-based games during the upcoming the Mobile World Congress in Barcelona next week.