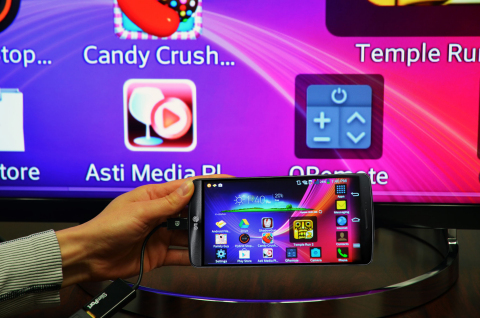 The Quad HD (2560×1440) 5.5 inch display, innovative laser infrared focus camera and redesigned graphic user interface make the LG G3 bigger and yet simpler to use. In keeping with the spirit of “Simple is the New Smart”, the G3 features SlimPort under its metallic skin for simple and reliable plug-and-play connectivity to bigger screens and peripherals.

“With its SlimPort TV output capability, the LG G3 expands the whole experience to beyond just a smart phone, allowing applications to extend to big screen, big speakers and big keyboards,” said Andre Bouwer, vice president of marketing for Analogix.

SlimPort gaming demos featuring the LG G3, as well as SlimPort-4K and productivity solutions are on display at the Analogix Booth D86 in Hall N2.

Analogix Semiconductor, Inc. designs and manufactures semiconductors for the digital multimedia market, from portable devices such as smartphones to high-end graphics cards and large, high-definition displays. Analogix is the market leader in providing end-to-end interface connectivity semiconductor solutions for DisplayPort, including the SlimPort family of products. The DisplayPort standard is an innovative, packetized digital interface for high-resolution video and audio that was developed by the Video Electronics Standards Association (VESA). SlimPort branded products are compliant with the DisplayPort and the Mobility DisplayPort (MyDP) standard.

Analogix and SlimPort are trademarks or registered trademarks of Analogix Semiconductor, Inc. All other trademarks and trade names are the property of their respective owners.