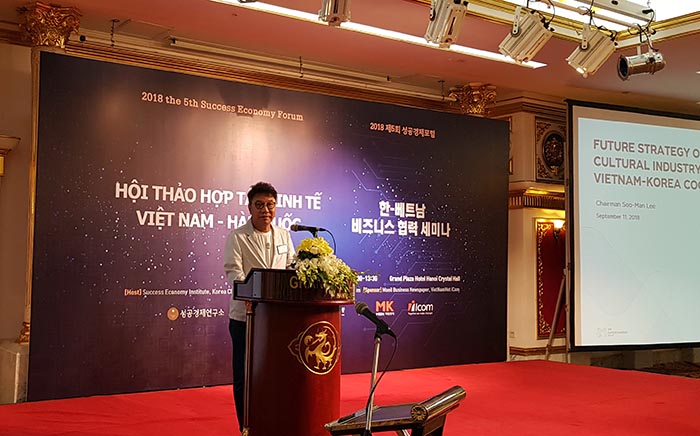 SEOUL, Sept. 12 (Korea Bizwire) — “We are preparing to set up a subsidiary in Vietnam,” said Han Se-min, the CEO of SM Entertainment, on September 11 in Hanoi.

The remarks by the head of the country’s No.1 entertainment company came during a panel discussion at the Korea-Vietnam Business Cooperation Seminar on September 11.

“We plan to first discover and develop talent in Vietnam and help nurture them into stars, not just in Vietnam but also in Asia and across the globe,” Han continued.

This follows up the blueprint mentioned in December 2017 by executive producer Lee Soo-man, a venture referred to as the “NCT Vietnam” project. This project aims to launch a sub-unit of NCT, a popular boyband formed by SM, in Vietnam.

Lee attended the seminar as the keynote speaker, and said, “Like I mentioned before, SM plans to discover Vietnamese artists to debut ‘NCT-V’ and nurture them into world stars.”

“I am determined to share our success with Vietnam,” he stressed.

The founder of SM added, “The Korean wave, or hallyu, in Vietnam has reached its maturity. People want to know about Korean culture more than ever before.”

“Vietnam, full of young people, is a country of possibilities,” he added.

SM has been showing a great interest in the entertainment business in Vietnam.

“Through this strategic alliance,” SM commented through its official social network account, “SM Entertainment will make an entry into the dynamic Vietnamese market to pursue a variety of global businesses including entertainment, advertising, media and lifestyle.”

Meanwhile, the seminar was co-hosted by Korea Chamber of Business in Vietnam (KorCham) and the Success Economy Institute. Dozens of business people from Vietnam and Korea, including those operating businesses in Vietnam, attended.

Tran Van Tung, the Deputy Minister of Science and Technology in Vietnam, and other government officials were also present at the seminar, showing great interest.