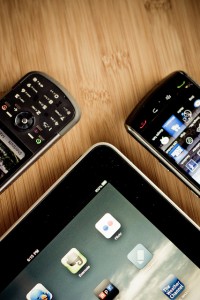 SAN MATEO, Calif. June 17, 2014 (Korea Bizwire)–Worldwide smart connected devices (SCD) are forecast to grow 15.6% year  over year in 2014, reaching close to 1.8 billion devices according to  the International Data Corporation (IDC)   Worldwide  Quarterly Smart Connected Devices Tracker. Smartphone growth is  expected to lead the charge as PC and tablet plus 2-in-1 forecasts have  been lowered in light of a weak first quarter. By 2018, IDC estimates  shipments will grow to 2.4 billion units.

“Apple’s iOS-ification of Mac OS, and Microsoft’s implementation of  Modern UI throughout different form factors are clear indicators that  we’re living in a mobile-first world,” said Jitesh  Ubrani, Research Analyst, Worldwide  Quarterly Tablet Tracker. “The PC will be the new accessory to  mobile as smartphones become the first and primary computing device for  many.” IDC expects smartphone shipments to outpace total PC shipments by  more than 6 to 1 in 2018.

The smartphone installed base is quickly approaching two billion units,  and vendors are scrambling to find the next two billion users in new  markets. As such, IDC is forecasting strong double-digit growth in the  low-cost Android smartphone segment that is driving much of the growth  in emerging countries such as China, India, and Brazil. Meanwhile,  mature markets such as the United States and Western Europe are slowing  to single-digit growth rates as the installed base swells.

“Low-cost Android smartphones will drive much of the SCD shipment growth  in coming years,” said Tom  Mainelli, Program Vice President for IDC’s Devices and Displays  group. “The influx of inexpensive phones will drive the SCD average  selling price bands downward, with the sub-$200 band increasing from 33%  of total shipments in 2013 to greater than 43% in 2018, while devices  that cost more than $500 are forecast to shrink from 33% of total device  shipments to 21.1%.”

In addition to the table above, an interactive graphic showing the  product category shares of the worldwide smart connected device market  over the 2013-2018 forecast period is available here.  The chart is intended for public use in online news articles and social  media. Instructions on how to embed this graphic can be found by viewing this  press release on IDC.com.

IDC  Tracker products provide accurate and timely market size, vendor  share, and forecasts for hundreds of technology markets from more than  100 countries around the globe. Using proprietary tools and research  processes, IDC’s Trackers are updated on a semiannual, quarterly, and  monthly basis. Tracker results are delivered to clients in user-friendly  excel deliverables and on-line query tools. The IDC Tracker Charts app  allows users to view data charts from the most recent IDC Tracker  products on their iPhone  and iPad.

International Data Corporation (IDC) is the premier global provider of  market intelligence, advisory services, and events for the information  technology, telecommunications, and consumer technology markets. IDC  helps IT professionals, business executives, and the investment  community to make fact-based decisions on technology purchases and  business strategy. More than 1,000 IDC analysts provide global,  regional, and local expertise on technology and industry opportunities  and trends in over 110 countries. In 2014, IDC celebrates its 50th  anniversary of providing strategic insights to help clients achieve  their key business objectives. IDC is a subsidiary of IDG,  the world’s leading technology media, research, and events company. You  can learn more about IDC by visiting www.idc.com.