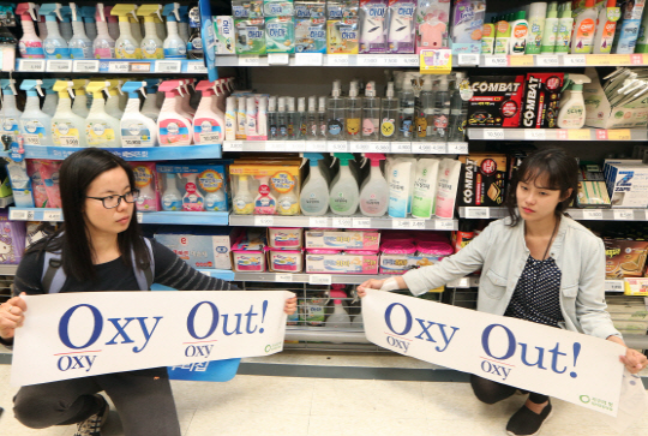 Members of the Korean Federation for Environmental Movement call for a boycott of products made by Oxy Reckitt Benckiser Korea. (image: Yonhap)

SEOUL, May 6 (Korea Bizwire) – Prosecutors raided the office of a Seoul National University (SNU) professor in the country’s capital and arrested the scholar Wednesday over allegations he manipulated reports on Oxy Reckitt Benckiser products in return for money.

Oxy is currently being probed by state prosecutors over its toxic humidifier sterilizers that have been cited for causing many deaths and illnesses.

The Seoul Central District Prosecutors’ Office said the professor, identified only by his surname Cho, is accused of writing favorable reports for the British consumer product company after receiving hundreds of millions of won in research funds. In the reports, he said the causal relation between the humidifier sterilizers and lung diseases is not clear.

Prosecutors raided the veterinary professor’s office and home and confiscated computer hard drives and records on lab experiments. Cho was arrested at the office.

The office and home of a professor at Hoseo University in South Chungcheong Province were also raided following similar allegations raised.

The British company asked the professors, acknowledged as authorities in toxicology in South Korea, for reports to rebut the announcement by the Centers for Disease Control and Prevention (CDC) in August 2011 that the company’s products caused lung injuries.

The company paid the SNU and Hoseo University 250 million won (US$217,000) and 100 million won as research funds respectively and remitted additional money to the professors’ personal accounts as consultancy fees, according to prosecutors.

The British manufacturer is suspected of submitting reports that are favorable to it to the state prosecutors and the court.

Prosecutors said they are investigating whether the professors controlled certain variables to induce results they wanted and whether they manipulated data on the reports.

The prosecutors’ move came a few days after Ata Safdar, CEO of Oxy Korea, apologized for selling the deadly sterilizers and proposed that other makers of similar products, namely discount chains Lotte Mart and Homeplus, work with the company on joint compensation.

Oxy started selling its products in Korea in 2001, followed by local companies.

It wasn’t until 2011 that the products were taken off the shelves after mysterious deaths from lung complications were linked to the sterilizers.

South Korean government confirmed 221 people as victims. Among them, 177 had used Oxy products. Out of 90 deaths, 70 are believed to have been from using Oxy products. Civic groups say the extent of the harm is much larger.

Earlier on Wednesday, representatives of the victims left for Britain and Denmark to protest against companies that sold toxic humidifier disinfectants in South Korea.