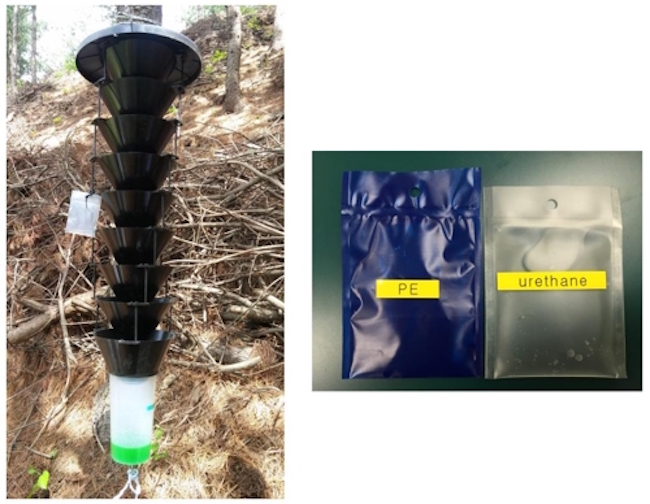 SEOUL, Sept. 26 (Korea Bizwire) – A team of Seoul National University researchers have successfully conducted a field test in which extracted male pheromones from the longhorn beetle were used to limit the spread of pine wilt disease.

Also referred to informally as “Pine Tree AIDS” for its deadly and near-untreatable nature, pine wilt disease was first discovered in domestic pine trees in 1998. By 2014, forestry authorities’ estimates reported that 2.18 million trees were infected.

Without a cure, the only form of protective action possible was prevention. Helicopters spraying pine tree forests with pesticides was the preferred method.

Thanks to such efforts, as of April this year, estimates for infected trees dropped precipitously to 990,000. However, as recent safety scandals over consumer goods have become mainstream issues, the pesticides has become a subject of debate in South Korean society, with the general consensus veering towards disapproval of use of chemical-based insecticides.

Amidst this societal backdrop, the successful application of professor Park Il Kwon and his team’s eco-friendly approach is good news for regulators and the general public alike.

Stopping pine wilt disease has always depended on interrupting the reproductive chain of the carrier longhorn beetle. Tiny eelworms barely 1 mm long infiltrate pine trees and block off all openings, suffocating the tree and causing it to die of dehydration. Females then visit the dead tree and lay eggs, which hatch into larvae that become carriers of the eelworms. When the larvae grow into adulthood, the full-grown beetles fly off to other pine trees, and the cycle is repeated.

Park’s team found a way to disrupt this cycle by first discovering that only the male exudes the pheromone Monachamol and subsequently extracting the substance and mixing it with other compounds like ethanol to maximize its potential as a lure for females.

After lab work was completed, Park’s team visited the pine forests of Hongcheon, Gangwon Province, where they installed two types of traps on trees: ones filled with the pheromone bait and ones without.

The results were overwhelmingly positive; over 200 beetles, 75 percent of them female, were ensnared in the baited traps, while the standard traps only held six.

Upon announcing the results of the field tests, Park said, “The eco-friendly method we have developed will not only serve to drastically reduce instances of airborne pesticide dispersal, which damages the ecosystem, but will also be far more effective in reducing the numbers of longhorn beetles,, as it suppresses reproduction itself.”

Developed in collaboration with venture capitalist firm KIP and the Korea Forestry Research Institute, the results of the research are expected to hit the market in product form in the near future.