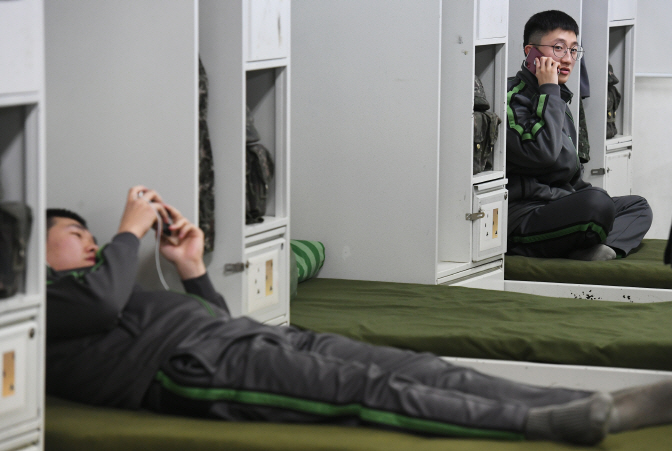 Soldiers using mobile phones under a pilot program at a barracks of an Army unit in Gapyeong, near Seoul. (Yonhap)

SEOUL, Apr. 1 (Korea Bizwire) – The military on Monday began to conduct a three-month pilot program to allow all rank-and-file soldiers to use their mobile phones after daily duties before it decides whether to implement it, the defense ministry said.

Since April last year, it has expanded the number of military units, whose soldiers are allowed to use their mobile phones, in phases. The pilot program that started Monday involves all soldiers in the Army, Navy, Air Force and Marine Corps.

Under the measure, soldiers are to keep their individual phones at designated places and be allowed to freely use them at all on-base places except for high security areas between 6:00 p.m. and 10 p.m. on weekdays and between 7:00 a.m. and 10:00 p.m. on holidays.

The use of cell phones, which had been banned for security reasons, for filming photos and videos, and recording sound are prohibited.

Monday’s implementation of the pilot program came after the military began in February to allow rank-and-file soldiers to go off base after work for four hours on weekdays up to twice a month, a measure to help them communicate with society better and ensure sufficient rest in advance of military maneuvers and drills.