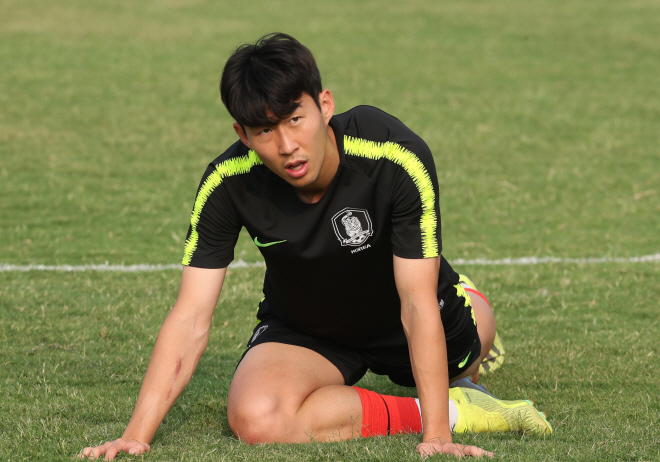 The English football-related news website “90min Football News” published a story earlier this month with the headline “Give Him a Rest!” Goal.com, another international football website, posted a report on Son’s grueling schedule since the Russian World Cup Games.

Son’s schedule speaks for itself. The football player joined the Korean national team in preparation for the World Cup Games immediately after playing his last match of the 2017-2018 English Premier League on May 13.

After joining the national team, Son continued with high intensity training before playing 79 minutes in a match held in Daegu against Honduras on May 28.

On June 1, Son played the entire duration of a match held in Jeonju against Bosnia and Herzegovina.

Son’s efforts continued. After training at a sports camp in Austria in preparation for the World Cup, the Korean football player competed against Bolivia on June 7 and played a game against Senegal on June 11.

Son was not able to enjoy a break before he took part in the World Cup held in Russia.

After the World Cup, he got a measly 20-day rest before returning to England to join his team in training and practice matches. Afterwards, Son travelled to the U.S. to participate in the International Champion’s Cup.

In the States, Son competed against AS Roma (Italy) on July 26, FC Barcelona (Spain) on July 29 and AC Milan (Italy) on August 1.

Returning back to the U.K., Son came on in relief during the opening game of the 2018-2019 Premier League against Newcastle on August 11.

But Son’s intense schedule continued, as he played six matches during the 2018 Asian Games held in Jakarta-Palembang before returning to Korea.

Football experts say that the fact that Son had to play so many matches during the off-season when other athletes enjoyed their rest is problematic, but a bigger issue may be the long distances Son had to travel to and from the international matches, possibly causing him to suffer from jetlag.