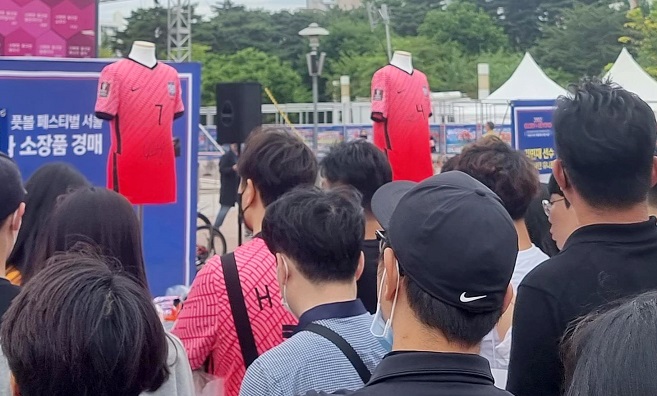 The signed national team jersey of Son Heung-min (L) and Kim Min-jae are displayed at a charity auction event in Seoul on June 5, 2022. (Yonhap)

Son’s red No. 7 national team shirt started with a price of 220,000 won, but it reached 6 million won only three minutes after the auction began. Then, a 24-year-old fan made a 6.5 million-won bid and was declared the winner.

“I was not sure that I would win, but I am thrilled that I was able to get the jersey in the end,” said Kim Woo-jin, who won the signed jersey of the Tottenham Hotspur attacker.

“I am a die-hard fan who searches Son Heung-min on the internet more than 10 times a day and watches his videos five times every day. I really want to meet Son.”

She also received two tickets to South Korea’s friendly match against Egypt at Seoul World Cup Stadium on June 14 and a ball with Son’s handwritten signature. 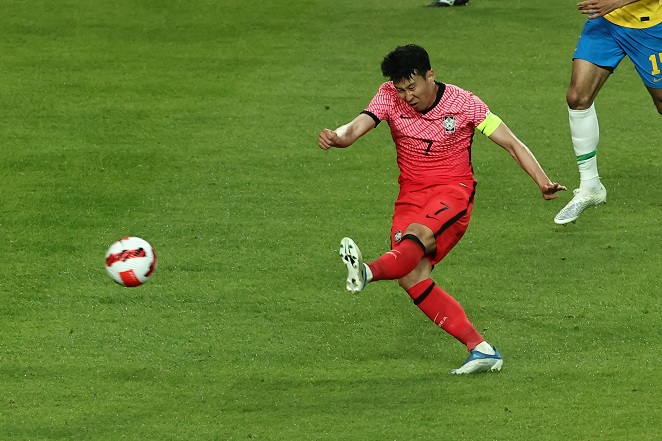 Meanwhile, Fenerbahce defender Kim Min-jae’s national team jersey with his autograph was sold for 2.1 million won at the auction organized by the Korea Football Association (KFA).

The proceeds from the charity auction, which opened Wednesday, will be used for the construction of the KFA’s new national training center in Cheonan, some 90 kilometers south of Seoul.

The KFA’s final charity auction Monday will feature Son’s football boots that the player wore in a World Cup qualifying match against Iran in March, as well as the boots worn by goalkeeper Kim Seung-gyu.