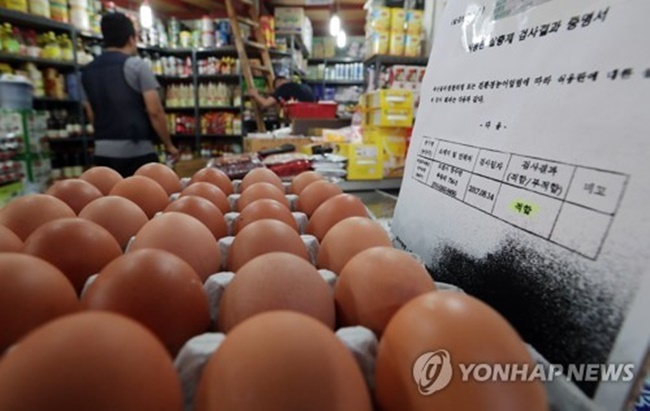 “The government is tracking all tainted eggs and will discard them,” Agriculture Minister Kim Yung-rok said in a National Assembly session. “We will publish all information on the quarantine inspections and measures online.” (Image: Yonhap)

“The government is tracking all tainted eggs and will discard them,” Agriculture Minister Kim Yung-rok said in a National Assembly session. “We will publish all information on the quarantine inspections and measures online.”

He also offered an apology for the latest food scare, which broke Tuesday when eggs from three local farms were first found to have been contaminated by pesticides.

Eggs from six farms were found to contain fipronil, a pesticide designed to control ants, cockroaches and other insects, the Ministry of Agriculture, Food and Rural Affairs said. They also noted that 26 farms were polluted with bifenthrin, which is used on agricultural crops.

The government has so far inspected 876 out of the 1,239 registered farms across the country and imposed a temporary ban on the sale of eggs at local retailers and supermarkets to ensure eggs contaminated with the harmful insecticides do not reach consumers.

The ministry said it will discard all eggs produced from the 32 farms that have used harmful substances exceeding permissible levels.

In addition, eggs produced by 35 separate farms — which were certified as “eco-friendly” and not allowed to use pesticides — also tested positive for such restricted chemicals.

As of Thursday, 844 farms passed the government-led inspection and were allowed to resume supplying eggs. They are able to supply 86.4 percent of the estimated 43 million eggs consumed every day in South Korea.

The ministry added that the distribution of eggs will return to a normal level by Friday.

But eggs sold at the country’s largest discount chain E-Mart were also found to be contaminated by bifenthrin, as were those at another major hypermarket chain Homeplus.

E-Mart said the eggs supplied by tainted farms made up less than 5 percent of all eggs sold at its stores, adding that it has discarded all of the eggs in question.

Eggs have been in short supply in South Korea in recent months after the country was hit hard by two outbreaks of bird flu since November.

South Korean quarantine officials have slaughtered more than 38 million poultry, including 25.2 million egg-laying hens, a move that has reduced the country’s daily egg output by about 30 percent, according to government data.