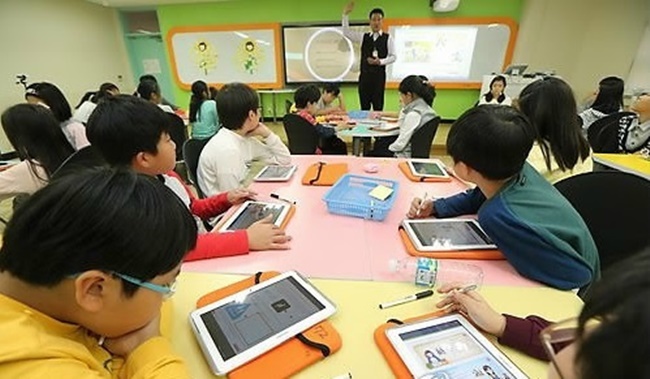 Though the country ranked third in after school education, the survey showed South Korean children spend the least amount of time speaking or playing with their family. (Image: Yonhap)

SEOUL, May 2 (Korea Bizwire) – Third-grade elementary school students in South Korea are the least happy despite being well-off compared to students in other countries, a recent survey has revealed.

The survey conducted by the international NGO Save the Children and the Institute of Social Welfare at Seoul National University compared South Korean third-graders with more than 17,000 of their peers from 15 other countries in terms of happiness, and discovered that South Korean children ranked 14th, closely followed by Ethiopia and Nepal.

South Korea fared badly when it came to family time.

Though the country ranked third in after school education, the survey showed South Korean children spend the least amount of time speaking or playing with their family.

Even at school, the level of happiness among South Korean third-graders trailed behind that of those from countries including Algeria, Colombia, the U.K., Germany, and Estonia.

With regards to maintaining a good relationship with teachers, South Korean third-grade students ranked 14th both in having respect for and being treated fairly by teachers.

The number of South Korean third-graders who said no when asked whether they enjoyed going to school or not saw the country disappointingly rank 15th.

While South Korean children were among the richest of the countries surveyed, with most respondents saying they have enough clothes, a computer and access to the internet, only a few said they were materially happy, winding up in 14th place.

Middle school students in South Korea find themselves in an even harsher situation, as they are mired at the bottom of the satisfaction rankings concerning friendship, school life, local community and confidence.

Chief researcher Professor Lee Bong-ju at Seoul National University said, “Even though South Korean children are among the richest internationally, the level of happiness they feel is among the lowest.

Save the Children and the Institute of Social Welfare at Seoul National University are set to announce the survey findings at a research conference scheduled today in Seoul.