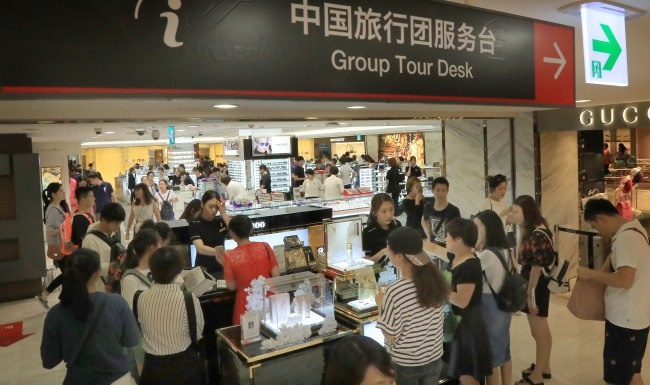 Hana B&D, located at the Pyeongtaek port, some 70 kilometers south of Seoul, will end operations Saturday, according to city officials. (Image: Yonhap)

SEOUL, Sept. 26 (Korea Bizwire) – A South Korean duty-free store will shut down this week amid a sharp drop in the number of Chinese tourists following a diplomatic row over the deployment of a U.S. missile defense system here, officials said Tuesday.

Hana B&D, located at the Pyeongtaek port, some 70 kilometers south of Seoul, will end operations Saturday, according to city officials.

The company asked the city to terminate the contract Sept. 1, citing difficulties in running the store due to a sharp decline in the number of Chinese tourists, they said.

The duty-free operator’s request to cut rent, which was about 1.8 billion won (US$1.58 million) annually, was known to have been rejected by the Pyeongtaek city government.

The move marks the first time that a local duty-free operator closed down after Beijing banned its travel agencies from selling Korea-bound package tours. The ban has been in effect since mid-March and is seen as an apparent retaliation over the deployment of the Terminal High Altitude Area Defense (THAAD) system.

The local duty-free industry is struggling to cope with the fallout, with Hanwha Galleria, a retail unit of Hanwha Group, having already decided to shutter its duty-free shop at Jeju International Airport on the southern resort island of the same name later this year.

Lotte Duty Free, South Korea’s top duty-free operator, is also in talks with Incheon International Airport Corp. (IIAC) to adjust its rental fees. The company said it is reviewing the option of withdrawing from the country’s main gateway, located west of Seoul, if the airport operator refuses to help it cope with the drop in Chinese customers.