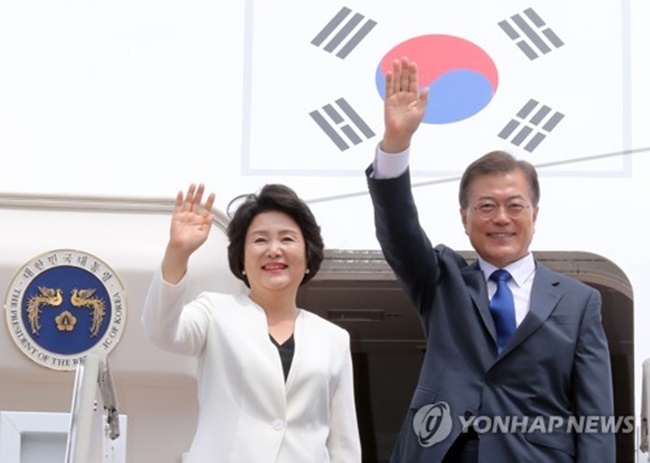 President Moon Jae-in and first lady Kim Jung-sook wave before departing for the United States at Seoul Air Base in Seongnam, south of Seoul, on June 28, 2017. (Image: Yonhap)

SEOUL AIR BASE, June 28 (Korea Bizwire) – South Korean President Moon Jae-in headed to the United States on Wednesday for a summit with his U.S. counterpart Donald Trump, which will likely focus on how to rein in North Korea’s growing nuclear and missile capabilities, as well as forming a personal relationship to last their presidencies.

Moon was set to arrive in Washington on Wednesday (U.S. time).

His meeting with Trump will literally mark an international debut of the new South Korean president who came into office May 10.

The U.S. visit comes at the formal invitation from the U.S. president, who called on the very evening of Moon’s inauguration to congratulate the new South Korean leader on his election.

Officials from South Korea’s presidential office Cheong Wa Dae have repeatedly stressed the importance of Moon and Trump forming a “personal friendship” and “mutual trust” as they will lead the two allied countries at least for the next four years.

“We hope the two heads of state will form a close relationship and trust, so over the next five years, they will establish a close consultative mechanism through telephone conversations whenever necessary, reciprocal visits and multilateral meetings,” Chung Eui-yong, head of the presidential National Security Office, said earlier.

Apparently highlighting the importance of the Korea-U.S. alliance, as well as Moon’s personal history related to the alliance, the South Korean president will begin his four-day U.S. trip with a visit to the new memorial for the Jangjin Lake Campaign in Quantico, Virginia.

The 1950 battle, considered one of the fiercest in the 1950-53 Korean War, delayed an eventual southward advance of North Korean and Chinese forces, enabling the evacuation of some 90,000 Korean refugees, including Moon’s own parents, from what is now Hungnam, North Korea, in an operation known as the Hungnam Evacuation.

Moon has noted the evacuation, code-named Christmas Cargo, saved his parents and thus himself.

He and his wife, Kim Jung-sook, will attend a dinner hosted by the first U.S. couple at the White House on Thursday.

Moon and Trump will hold their talks the next day, followed by a joint press conference where they will issue a joint statement on the outcome of their summit, according to Cheong Wa Dae officials.

He will head home Saturday.