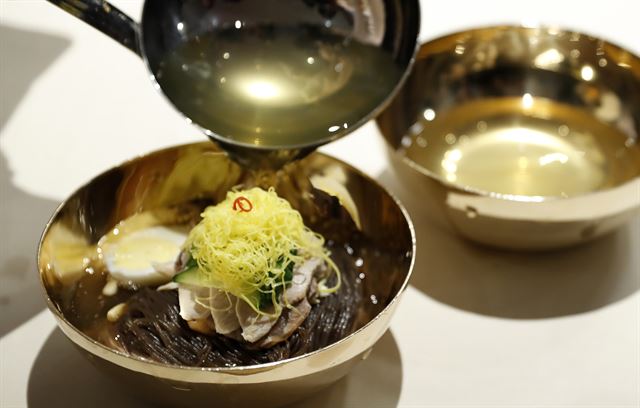 A variety of symbolic dishes were served at the dinner after the leaders of South and North Korea hold their first summit on the southern side of the border on Friday. Cold noodles from a famous Pyongyang restaurant ‘Okryugwan’ was one of them. (image: Yonhap)

SEOUL, Apr. 30 (Korea Bizwire) — Following the inter-Korea summit on Friday, sentiments reflecting hopes of peace in the Korean peninsula are pouring out from the public.

The government’s social media accounts as well as the public forum on the Blue House website were flooded with posts that reflected the rosy expectations of unification.

As Pyongyang naengmyeon – a cold noodle dish – was all the rage during the summit talks, there were petitions asking for a Seoul branch of Okryugwan, the famed North Korean restaurant that specializes in the delicacy.

One post commented that opening up a branch in South Korea could help facilitate cultural exchange and would “make a great first business venture” between the two Koreas.

Another post noted that if Okryugwan were to open in Seoul, more people could experience the peace between North and South and the venture could even come to symbolize peace between the two countries.

The popularity of the dish was also reflected in social media circles, where many users posted their plans to have cold noodles over the weekend after the summit. Famous naengmyeon restaurants across the nation benefited from the summit as people flocked to enjoy their favorite North Korean dish.

Lee, one such connoisseur, said that she hoped that unification would materialize one day so that she would be able to enjoy Pyongyang naengmyeon in various parts of Seoul.

Yet others asked that Taedonggang Beer manufactured by the North be imported so that it could be “the first item to be exchanged economically between the two Koreas.”

Food aside, some South Koreans expressed their hopes of traveling to North Korea.

One Twitter user thought that more Koreans may end up traveling to North Korea than other overseas destinations upon unification. Another social media user hoped for a transnational railway that would link Seoul and Pyongyang to Europe.

One college student mentioned his experience of traveling to Europe from Siberia.

If the North and South were to become a single nation, one day it might even be possible for people to embark on a train from Seoul Station headed for Berlin.