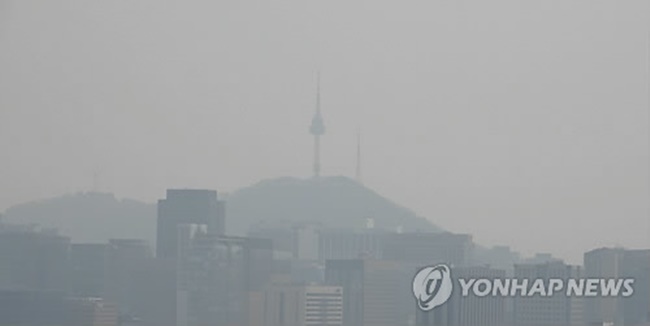 This photo, taken on April 4, 2017, shows Seoul blanketed in a gray haze caused by fine dust in the air. (Image: Yonhap)

SEOUL, April 5 (Korea Bizwire) – South Koreans on Wednesday sued the governments of Seoul and Beijing, seeking compensation over mental distress they suffered due to fine dust, the plaintiffs said.

Choi Yul, Korea’s environmentalism pioneer and president of the Korea Green Foundation, and attorney Ahn Kyung-jae filed the case with the Seoul Central District Court, seeking 3 million won (US$2,600) in compensation each. Five others also took part in the suit with the two plaintiffs as their representatives.

South Korea has been grappling with worsening air quality every year, as clouds of fine dust particles, believed to mainly come from the western deserts of China and domestic smog, cover the sky with yellow haze. The particulates are known to cause various respiratory problems while also affecting the body’s immune system.

Ahn was diagnosed with asthma Tuesday, they said in the complaint, claiming he had good lung capacity until then.

“As a member of the international community, China has the obligation to control pollutants at an acceptable level,” they said, claiming the neighboring country neglected such duty.

South Korea, meanwhile, failed to clarify the exact cause of the fine dust, they said.

“The purpose of this suit is to find out the cause of fine dust and to set a milestone for the two countries to lead Asia in the new era based on mutual efforts,” they said in the petition.