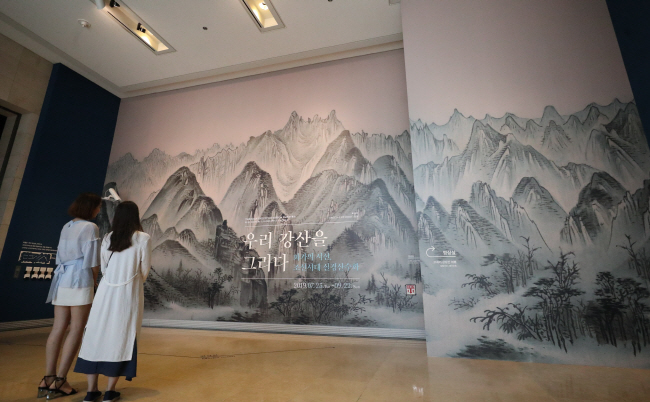 Visitors take in the National Museum of Korea’s special exhibition “Through the Eyes of Joseon Painters” during a press event on July 22, 2019, at the museum in Seoul. (Yonhap)

SEOUL, Jul. 23 (Korea Bizwire) — At a command of the art-loving Joseon king Jeongjo in 1788, two royal court painters — Kim Hong-do and Kim Eung-hwan — went on a 50-day sightseeing journey that brought the duo from what is now South Korea’s eastern province of Gangwon up to North Korea’s Mount Kumgang.

This journey inspired Kim Eung-hwan to draw a massive album of 60 impressionistic paintings of the scenic mountain, tinted in many different shades of moss green.

The same scenes the duo admired together, however, turned into a roll of very detailed, realistic landscape drawings at the hand of Kim Hong-do, one of the most revered Joseon-era master painters.

King Jeongjo might have been well aware of and appreciated the contrasting artistic personalities of the two painters when the final works from the journey were given up to the king.

The final album of paintings by Kim Hong-do, also known by his pen name Danwon, was lost to a fire later and the original sketch version of the album is now being put on display for a special exhibition by the National Museum of Korea alongside his travel mate’s album.

Including the two massive sets of paintings, the special exhibition, “Through the Eyes of Joseon Painters: Real Scenery Landscapes of Korea,” brings together 360 Joseon-era sketches and paintings of famous scenic spots across the Korean Peninsula.

“While Kim Hong-do painted in a very detailed and meticulous manner, Kim Eung-hwan performed his brush strokes unhesitatingly. … You can appreciate how differently the two expressed the same scenery,” Lee Soo-mi, an official at the national museum told reporters on Monday.

The renaissance of landscape paintings under King Jeongjo (1752-1800) owed much to Jeong Seon, a legendary painter under the previous king, Jeongjo’s grandfather King Yeongjo.

The painter is best known for his panoramic painting of Mount Kumgang, which, created at the age of 58, gives a comprehensive, realistic view of the rocky mountain that was historically praised for its tens of thousands of precipitous peaks. 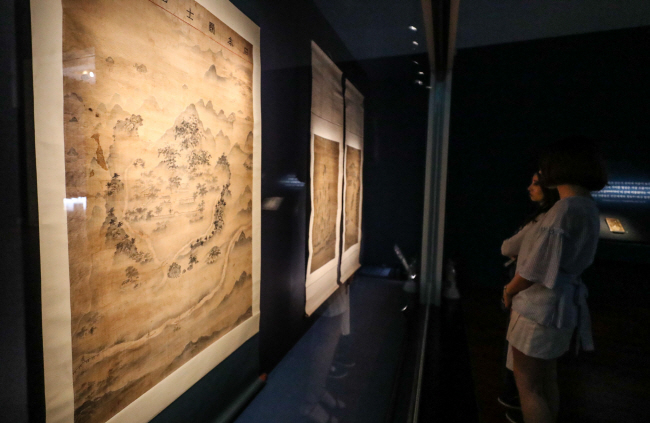 Visitors look at a painting in the National Museum of Korea’s special exhibition “Through the Eyes of Joseon Painters” during a press event on July 22, 2019, at the museum in Seoul. (Yonhap)

On display in the special exhibition is Jeong Seon’s first painting of the famous mountain.

At the age of 36, the acclaimed painter made his first visit to the mountain at the invitation of a friend who was appointed governor of a nearby town and carefully laid his vision of the scene onto a sheet of silk.

The painter’s first portrayal of the mountain, presented at the very start of the exhibition, is similar in composition to his more famous masterpiece, Geumgangjeondo, but its brushstrokes are more delicate and timid in comparison with the bolder strokes he used in the later work, which is South Korea’s National Treasure No. 217.

With his realistic style defined clearly in the landscape paintings, Jeong Seon spearheaded an artistic trend under which the painters of his time dropped the habit of copying Chinese paintings and took to portraying the scenery of their own country, seen with their own eyes.

“Through meticulous observations on changes in nature, (the painters of the era) developed their own unique perspective and painting style,” Lee noted.

Also highly notable in the exhibition is an album of ink drawings by Kang Se-hwang, the artistic mentor of Kim Hong-do, inspired by an expedition to a southern Korean town, as well as a set of scenic paintings by another iconic Joseon painter, Kim Yun-gyeom, whose style seems rather modern for the era.

Giving a modern touch to the collection of pre-modern paintings, the special exhibition employs a major installation at the center of the hall evoking a massive waterfall.

A video room was also installed to show slides of photos depicting major scenic spots that were frequently featured in historic paintings.

“Our mountains and rivers are indeed intimate (objects) to humans, and painters depicted such scenes with their own unique sense of beauty,” Bae Ki-dong, the director of the National Museum of Korea, told reporters, adding that it is the museum’s first comprehensive exhibition of paintings of North Korean regions in almost 20 years.