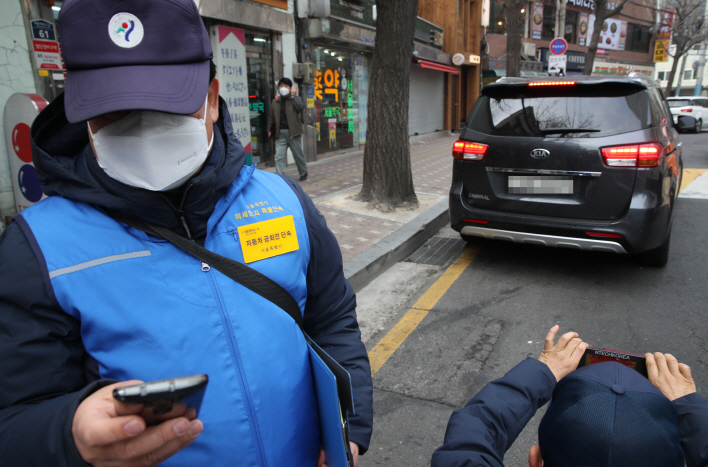 Employees of the Seoul Metropolitan Government cracking down on an idling diesel car on Jan. 15, 2019 after emergency anti-fine dust measures were declared in the capital area. (Yonhap)

The Special Act on Particulate Matter Reduction and Management, which was enacted and proclaimed in August last year, will also set the grounds for the establishment of a new government-civilian fine dust policy deliberation committee under the Prime Minister’s Office, the ministry said.

The special committee is to hold its first meeting on Friday to discuss comprehensive measures to reduce fine dust pollution, with the attendance of Prime Minister Lee Nak-yon, representatives of 17 central government bodies and private experts.

Under the special law, local governments are obliged to take emergency dust reduction measures if the daily average level of ultrafine particles, smaller than 2.5 micrometers in diameter, exceeds 50 micrograms per cubic meter and the figure is forecast to top that level again the following day.

Ultrafine dust particles, or PM 2.5, are known as a class one carcinogen.

The environment ministry has singled out 101 large-scale fine dust emission facilities nationwide that can be regulated by the special law, while estimating that there are about 36,000 construction sites to blame for generating fine dust particles.

Driving restrictions will be implemented as stipulated by the ordinances of each local government.

The Seoul Metropolitan Government, for example, has already completed its new legislation, which will restrict the use of grade 5 emission vehicles from 6 a.m. to 9 p.m. and impose a fine of 100,000 won on violators once emergency anti-fine dust measures are enforced.

With the implementation of the special law, South Korea aims to reduce its fine dust emissions by 35.8 percent in terms of the 2014 level by 2022.

The National Institute of Environmental Research, a think tank under the Ministry of Environment, has recently said that external sources, mostly from China, accounted for 75 percent of South Korea’s ultrafine dust air pollution in January.

The National Information Resources Service, an affiliate of the Ministry of the Interior and Safety, also said last month that China is largely responsible for fine dust particles over the Korean Peninsula after analyzing fine dust flows over the area of Incheon, west of Seoul, from January 2015 to March 2018.

The Beijing government, on the other hand, has persistently denied any responsibility for fine dust concentrations over South Korea.