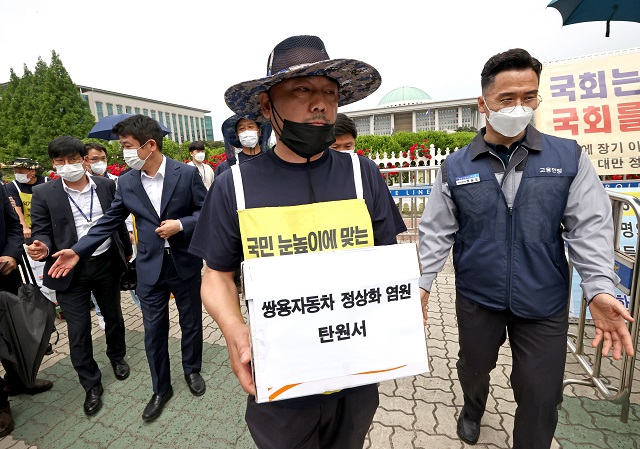 On Thursday, the labor union held a press conference in front of the National Assembly before submitting a petition to legislators.

“Despite 10 years having passed since 2,646 employees left the company in 2009, the situation remains unchanged,” said Chung Il-kwon, head of the labor union.

“It’s unfair to pass all of the responsibility to the employees. The idea of normalizing the company by cutting payroll is wrong.”

As for the current state of the sales process of the company, he noted that efforts are underway to select a lead manager and the sales process would likely begin in late May or early June after the selection is completed.

In response to a question asking how the government can support the normalization of the company’s management, he added, “The government should provide a relief loan to the company. In this case, SsangYong workers are willing to share the pain.”

In the petition, the labor union stressed that SsangYong Motor, currently under court receivership, has an employment effect of about 200,000 workers, adding that the company is engaged in a variety of self-rescue efforts, among others, cutting wages, selling after-sales service center in Seoul, reducing in the number of executives and reshuffling the organization.